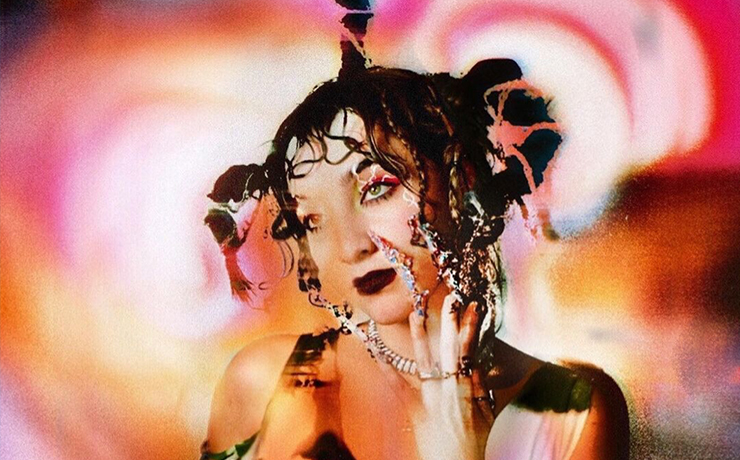 Have virtual photoshoots expanded our idea of what fashion modelling can be?

Bare nails are a thing of the past, with conceptual, avant-garde mani-pedis taking their place as the It trend. Whilst sculptural talons might not be the most practical, the zany aesthetic they embody for catwalks, music videos and photoshoots is every bit worth it. The three-dimensional designs are constructed in acrylics or gels, and often adorned with chunky gemstones, chains and anything nail-techs can get their hands on.

Juan Alvear is arguably the 3D-nails pioneer, working with flamenco-influenced pop-legend Rosalía, as well as Jazzelle Zanaughtti (aka @uglyworldwide) for Gucci Beauty. He’s disrupting the beauty world by taking whimsical, swirly shapes and twisted plastics to the nail bed, finished in metallic paints which make for extraordinary and unconventional nail-art design. The super-sellable concept is blowing up in editorial circles since it’s so fresh and bold, and Alvear’s bizarre creativity paired with his meticulous skill is a match made in heaven.

Another nail tech gaining notoriety is the genius Japanese artist Mei Kawajiri, with her fantastical designs being worn by the likes of Gigi Hadid and Euphoria star Alexa Demi. She proves that nails are more than just a manicure – the nail is becoming a new form of canvas for fine art and sculpture. Such bold nail extensions are not for the faint of heart, but they sure are mesmerising. Named one of the New Wave: Creatives at the 2019 British Fashion Awards, @nailsbymei creates highly textured, ornamental sets of nails, inspired by Victorian and Kawaii fashion with a strong 2000s aesthetic.

For an insider’s look, we spoke to young Leicester-based artist Aanaya Dayaram – who’s inspiration comes from her early adoration of glass blowing and quirky objects – about her other-worldly designs. “One day I was experimenting with random objects on my nails and spare bits I had in my room. I found a medium suited to creating nails, it’s so eccentric and makes me feel like we’re in another world.”

“Everyone who comes out with conceptual nails puts their own twist on the trend, and brings their own style and uniqueness to the nail-sphere”. The beauty surrounding the conceptual nail movement is that inspiration for a set can come from anywhere, which is why it’s gaining traction as a kind of editorial fashion for musicians, models and more. When it comes to creating and choosing colourways, @aanaya.d is influenced by electronic music, associating the dreamy sounds to certain colours, shapes and moods that then become a part of her explorative work.

Kitsch, sculptural nail-art is a craze we can see booming in popularity, and we think it’s one to try at least once.