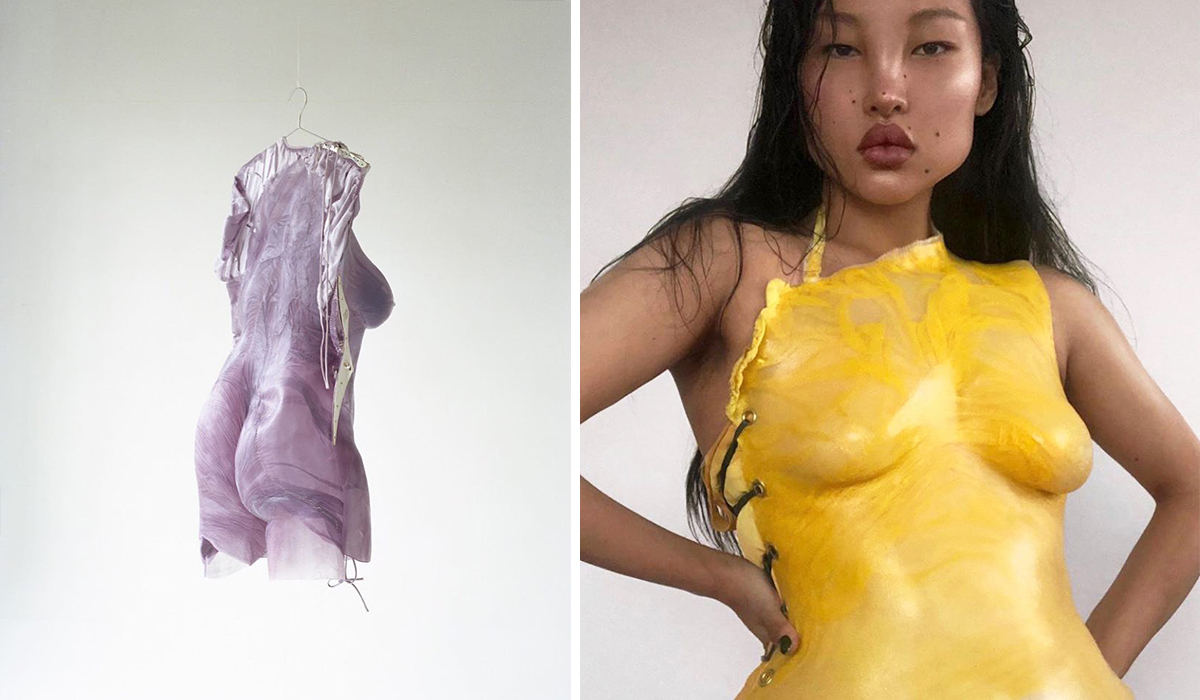 Growing up, you might never consciously recognise the influence that the fashion industry has on your self-esteem. Through the media, runways and clothing sizes, you’re taught to internalise a standard of beauty that you may be an outlier to.

Many womxn often succumb to societal pressures to fit within a certain weight group or bind themselves to a size due to the emphasised beauty of slim bodies over all others. But Irish designer, Sinead O’Dwyer is putting an end to all that.

For her graduate collection from the Royal College of Art–and as a special gift to womxn everywhere – Sinead took a stance against fashion culture. Taking cues from her own experiences and childhood fixations on how clothes fit, 23:19:26 was born. Named after the measurements of her model and muse, Jade, her collection and show were curated to represent communities who frequently feel othered.

“As a teenager, I was always really obsessed with how people looked in photos of clothes, rather than with the clothes themselves. Whenever I tried them on, I was desperately disappointed that I didn’t look like the pictures,” she explained.

This fixation with how clothing fit sparked an interest in our relationship with female bodies. These life-cast, pastel-coloured silicone moulds of the breast brought a Jean Paul Gaultier aesthetic with a louder statement. By creating a silhouette that perfectly fits the model, beauty can be found in every body type – deconstructing long-standing beauty ideals.

“It’s so ridiculous that the adult female body is always portrayed in one state,” she says. “There are so many transitions that women’s bodies go through in a lifetime. The fact that it’s not depicted makes us live in fear of our bodies changing, of no longer living up to that ideal.”

On the same feminist note, Martina (named after another muse), was intricately crafted with fibreglass moulds thin enough to demonstrate the fragility of the female body – highlighting the industries power to leave us feeling more exposed than anything.

As part of her creative progression, Sinead’s focus of mouldings expanded beyond the breasts to include the abdomen as she noticed more protruding stomachs during her life-casting process. Pairing her moulds with a fashion zine, 115:95:130. She was able to delve into the alienation of femxle bodies through fashion with her partner Ottilie Landmark, and fellow students Mahoro Seward, Jolien Van Schagen and Monika Gruzite.

“My work isn’t just about being an unconventional size, whether that’s being bigger or smaller. It’s about giving a voice to the emotional experience of female oppression, and challenging the idea that we should always be striving to be something ‘better’,” she expresses.

Sinead is among the new tide of designers breaking the mould. Instead of sitting quietly in an industry that dedicates what people should aspire to, they represent consumer’s aspirations of diversity and femxle empowerment not only in clothing but also in life.