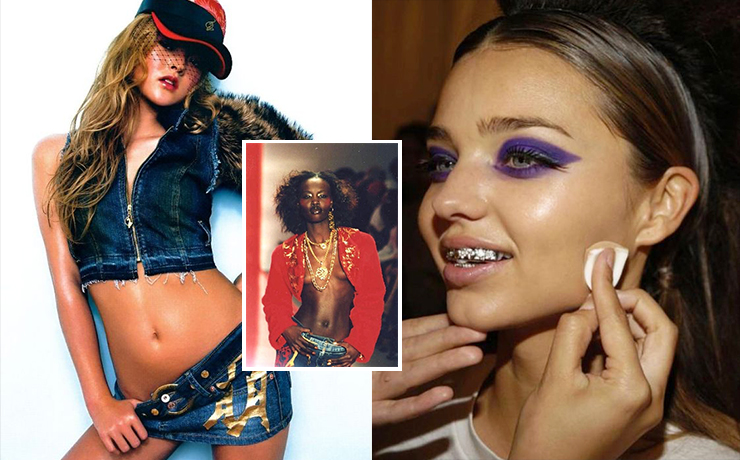 Spirituality-centered cyber storefronts for your start in self-healing

Dripped in rhinestones shaped like feline cats, Baby Phat was the fashion forefront of the 2000s. A merge between high fashion and streetwear, Kimora Lee Simmons brought black female culture to the runway like never before.

Born on May 4th,1975, to a black father and a Japanese-Korean mother, Kimora learned from a young age to be confident in oneself. Being a tall kid wasn’t easy, especially when you’re a tall black girl raised in the suburbs of Missouri. Because of this, her mother put Kimora in modeling classes at the age of 10-12 as a way for her to feel more confident in herself. And, by the age of 14, she was strutting the runway, closing shows for Karl Lagerfeld’s Chanel. Kimora credits her knowledge on the fashion industry to her time in Chanel and other high fashion brands, as she was able to observe from afar how things worked on the business side of things.

Married to Russel Simmons in 1998, co-founder of Def Jam Recordings, Baby Phat was created in 1999 as the female counterpart of Phat Designs. As the couple redefined what streetwear was, bringing it to the mainstream during the golden era of hip-hop, Kimora was able to transform Baby Phat from a clothing line to a lifestyle. Soon, her designs were pioneering 2000s fashion as it would appear in tv shows, movies, and even songs.

The brand garnered mass attention and support from influential black artists such as Beyonce, Lil Kim, and Missy Elliot. Although the brand wasn’t taken seriously by the high fashion world due to its lack of catering to the white bourgeois, Baby Phat still found major success. In a 2016 interview with Fader Magazine, she stated that,

“I didn’t want to be called “urban” because I didn’t understand what made me urban and, let’s say, Tommy Hilfiger not. Now, people in fashion might call it that, but they would not have said it then. To me, it was only called that because of the color of the people working there, and I thought that was some real racist shit. So back then, I was fighting the fight because I wanted to be included — it was fashion.”

By 2002, Baby Phat’s revenue went from $30 million to $265 million. Everyone was sporting the feline cat in their wardrobes. After that year, Kimora expanded the brand from clothing to Baby Phat Visa cards and limited edition diamond-encrusted Motorola flip phones. The phone was seen on the likes of celebrities like Raven Simone and Cam’ron.

By 2004, Russell Simmons was out of the picture for Phat Designs as he sold the company for $140 million; still, Kimora decided to keep Baby Phat and stay as creative director. And, in 2006, she became president of the company, crowning herself with the title of the first black woman to own a billion-dollar company (eat the rich, am I right?).

Unfortunately, things will only go downhill from here for the brand. Times were changing and with time, fashion too. Baby Phat was emerging into the late 2000s but wasn’t adapting to the rapid change of styles and trends that were going on (80s and hipster fashion). Because of that, Kimora Lee was removed from Baby Phat in 2010, resulting in the brand slowly disappearing from mainstream consumerism.

Fast forward to the late 2010s, and Y2K fashion is making a rapid comeback in recent years. Now everyone wants rhinestone tees, velour tracksuits, Von Dutch, and yes, Baby Phat. In a 2019 interview with Peoples Magazine, Kimora mentioned the return of Baby Phat, exciting thousands of people to the point that it was trending on Twitter. Nevertheless, the resurrection of the brand ended up being a complete disappointment when it was revealed that It would be a collaboration with the then-giant fast-fashion retailer Forever 21. Cue the sad music. Fans of the brand went on Twitter to express their grievances with the launch as it wasn’t at all the return of the nostalgic, sexy Baby Phat that they had been anticipating.

The brand launched with a total of 18 pieces under the price of $25 on June 13th, 2019. Despite the complaints, the collection sold out within the first 24 hours, but it didn’t feel like Baby Phat anymore. In my opinion, launching the collection with Forever 21 somehow cheapened the brand, especially when all they came out with was basics and nothing original. As a big fan of the brand, sporting Baby Phat since I came out of the womb, you can imagine my dismay when I went on the website and bought absolutely nothing. However, the clothes on their independent website is a slight improvement to the monstrosity that was the F21 collab. The only downside is that the brand hasn’t released anything new in months! It’s like giving a baby a small piece of candy when they want the whole thing.

Overall the comeback of Baby Phat wasn’t at all what the public was expecting, and that could be a good thing or bad thing. Nevertheless, Kimora Lee has cemented her mark in 2000s fashion with her brand, shaping a whole generation of women to be more open with their sexuality, luxury, and fabulousness.