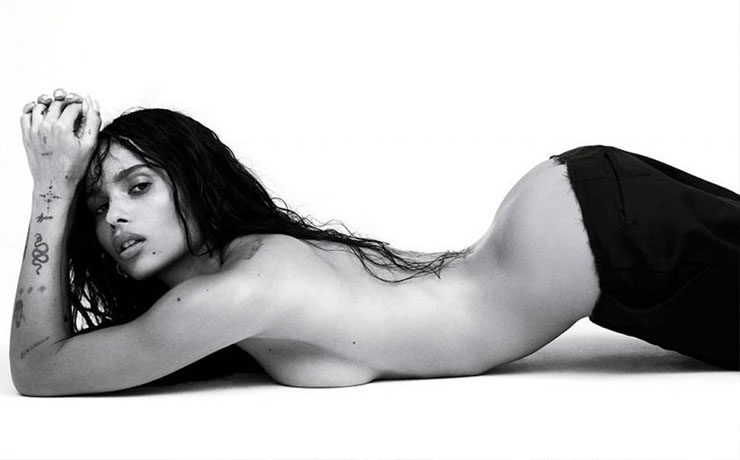 Zoë Kravitz once graced one of her first red carpets as a baby in a tribal print dress and matching beaded anklet. Lovingly wrapped in the arms of her la vie boheme mother, Lisa Bonet, and rockstar daddy Lenny Kravitz — a star was born. While her life was always destined for the fast lane, Zoë has truly battled her way to the frontier of the industry in her own right. Although being thrusted into the spotlight might not have been her ideal first choice, Zoë has embodied the role of resident cool girl.

A position shared by the likes of the Olsen twins and Chloë Sevigny has widened to include the obvious choice: Zoë Kravitz. She is a subtle mastermind when it comes to fashion, pulling off experimental looks in ways that are both effortless and chic.

What’s the key element to Zoë’s style? Her simplicity.

By mixing high-end garments with more available styles, there is a motif of accessibility that inspires not-so-basic girls everywhere. Many casual looks can be replicated in a DIY manner or even picked up at a local thrift store. And some of the brands she wears do have affordable pieces for fashion-lovers to invest in.

Pairing the most classy of looks with her simple micro-box braids and tiny tattoos, she understands the assignment of accessorizing. Zoë’s not afraid to embrace the current wave of trends , or even pioneer them herself. She’s been spotted in a range of styles from tiny Matrix sunglasses, a neon Fendi baguette bags, Old Hollywood opera gloves, graphic eyeliner, and chunky emerald gemstone earrings.

A personal favorite moment of hers in her style story has to be the icy blonde pixie cut.

For Zoë, less is more. While fits are rooted in minimalism, what makes them stand out is her intuitive ability to pair edgier, more eye-catching elements with a more subtle garment. She knows the importance of knocking a look up a couple notches without going overboard. This past summer, the whole Internet fell in love with her blue tank and mini Telfar street-style combination. Plain white tees, luxe slip skirts, ripped jeans and low mules, tailored coats— we ate it all up.

When Zoë starred in Hulu’s— now defunct, but forever cult classic— High Fidelity, a lot of her character’s styling came from her own closet and eye. Paired up with the mastermind costume designer Colleen Atwood, the two had the vision of bringing the  brokenhearted characters style to life by representing the cultural essence of Brooklyn. They pulled pieces from Kravitz’ own downtown chic closet and sought vintage pieces from thrift stores and textile fairs. The outfits translated the heart and soul of the Brooklyn scene.

Even when it came time for her wedding, she opted for anything but traditional.

Her Parisian rehearsal dinner look was a pearl beaded fishnet dressed layered over a matching set of ivory bike shorts and bra top. On the wedding day itself, she channeled the coquette essence of Audrey Hepburn with a simple bow headband and ballerina silhouette gown. She looked like a modern day fairytale princess with her bateau neckline and pastry shaped skirt. The key is that she never tries too hard. She understands the modus operandi of subtlety.

But the elegance galore extravaganza doesn’t stop on one special day for her.

Every time she sets foot on the red carpet, it’s an opportunity for her to take a stylistic chance and defy the limits of cool. It’s also a chance for her to show off her brand deals with powerhouses such as Yves Saint Laurent and Tiffany & Co. She represented the brands many times on the red carpet for events such as the Met Gala and Vanity Fair Oscar Party. For the Heavenly Bodies theme she was giving full Rihanna in a black lace YSL gown with a defying gravity high leg slit. Then for the Camp theme, her black sequin column dress has intricate heart shaped cutouts displaying her décolletage.

From bouncing back and forth between femme fairy looks to tailored suits and femme fatale dresses, Zoë knows how to be an aficionado of edgy high fashion. But when she’s not in sartorial mode, she’s also a champion of street style and channeling trend-setting minimalism. Zoë will always be the resident cool girl in our hearts.