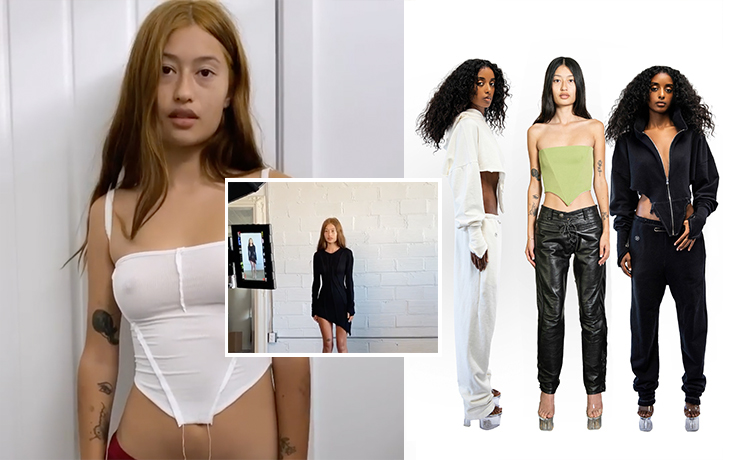 Los Angeles designer and vintage collector Sami Miró consistently shows that she’s one to watch — both on and off the runway. For her fall 2020 collection, Miró honed in on her well-established, cool girl aesthetic with a limited run of exposed-seam tanks, hoodies, and dresses. The sensual and sustainable designs have already been spotted on the likes of fellow it-girls Justine Skye, Devon Lee Carlson, and Kristen Noel Crawley.

Miró originally launched her namesake label Sami Miró Vintage in 2016 after switching from a career in the tech industry. She’s garnered a following around her highly coveted garments — many of which have been previously released as one-of-one. This season represents another shift in the San Francisco native’s career; she’s evolved into a full-fledged designer with curated ready-to-wear collections. According to Women’s Wear Daily, her latest fall collection is the first of four drops that she will debut this season, with each comprising five to eight different styles. From the sheer ribbed tank tops resembling corsets to the OG Mesh bodysuit with the Levi’s denim swatch, Miró has crafted something for every mood.

SMV Fall 2020 follows a pattern of upcycling and creative seam work that was showcased earlier this year in Miró’s spring collaboration with Heron Preston. The designer’s latest is an offering of versatile, Victorian-inspired basics made from upcycled fabrics like terry cloth and ribbed cotton. By repurposing vintage, Miró has tapped into the sustainability and originality of shopping secondhand. Loyal fashion collectors know there’s something special about owning something of small or limited quantities, of having something that has or will be deemed a holy grail item.

The pieces in Miró’s latest collection definitely have that unique appeal. Following a debut endorsement from Kylie Jenner, the V-shaped hoodie and 90s inspired safety pin sweatpants (a distinctly unisex style) were swiftly placed on pre-order status. Meanwhile, the Maximillian denim dress has completely sold out and the Alpha corset was created in a vintage green fabric that won’t return once stock runs dry.

Miró — who has typically employed a direct-to-consumer approach — is currently working to make her designs more accessible for purchase. The entrepreneur recently partnered with e-commerce site FWRD, the first retailer to offer her line in its entirety. In an video announcement, Miró described the resounding attributes of a SMV muse — someone who’s “forward-thinking, detail-oriented, and a raw beauty.” The same qualities could also be applied to the insightful, architectural nature of Miró’s designs. Many of the soft, feminine garments have eye-catching V-cut hems that add to their sex appeal and intrigue. The garments she shared this season — like the thick-seamed, asymmetric LBD — are constructed very thoughtfully, resulting in fit-conscious, collectible clothes that are full of undeniable flair.