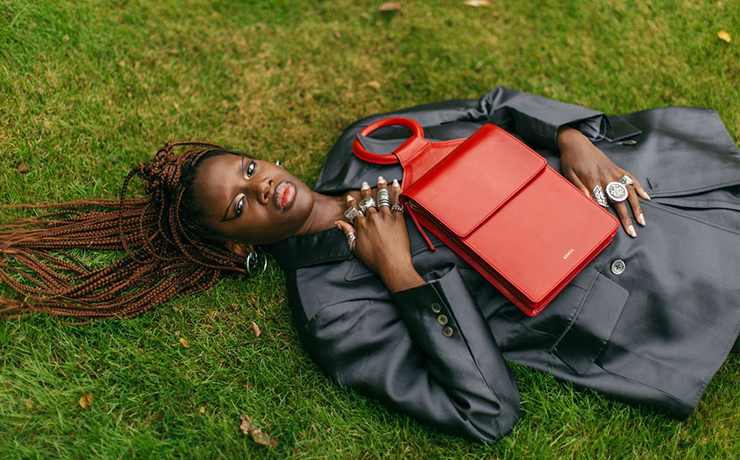 Meet Telsha Anderson, the stylishly-intuitive New-York based buyer and owner behind the modish conceptual design store t.a. The shop carries chic luxury womenswear, fine accessories, and both vintage/recent books and magazines that hold a significant space in the larger Black fashion scene. The New Black Vanguard and the Sade’s winter 2001 issue of Fader are just two of the titles that grace — or graced, the items sold out quickly — t.a’s carefully-crafted online selection. The pieces up for grabs at t.a are personally sourced by Anderson from all across the map. From Milan and South Korea to Paris and Peru, there are not many places that Anderson can visit and not source something elegant, rich, and refreshing. NBGA’s current personal favorites are the sleek and moody Simon Miller Knoll Dress in black which we think would pair nicely with the Dubié Black Tecno Boot which is fun, diagonal, and leather.

WHAT IS YOUR EARLIEST MEMORY OF LOVING FASHION?

My grandmother and my mother had closets and jewelry cabinets filled with some of the most coveted items in fashion history and often had one-of-a-kind pieces that I still don’t believe existed anywhere outside of their wardrobes. My inspiration for t.a. was genuinely curated to be an extension of their closets. That’s where I first fell in love with fashion.

WOULD YOU SAY THAT YOU’VE ALWAYS BEEN A FASHIONABLE KID, OR WERE BIG ON SELF-EXPRESSION? WHAT’S YOUR PERSONAL STYLE LIKE NOW?

Always! Growing up, my parents would constantly encourage my siblings and I to express ourselves in every way possible throughout our lives, whether that was through the way we dressed, our preferred taste of music, or how we chose to communicate. Then and now, my personal style is a reflection of my interests and living in the moment.

HOW WAS THE TRANSITION FROM WORKING IN PR TO HAVING YOUR OWN BUSINESS?

The transition from each job I’ve had has prepared me for this very moment. I’ve obtained such a wide range of responsibilities within each position. I’ve learned about industries outside of fashion, which I highly recommend for anyone becoming an entrepreneur, and I applied those different approaches into the building of t.a. From selling park guides and working in PR with influencers, to now having the opportunity to work for myself, it doesn’t get much better than that.

HOW DO YOU FIND SUCH PERFECT PIECES? WHAT’S YOUR FAVORITE PIECE YOU’VE SOURCED SO FAR?

I like to look at what other boutiques are offering and provide the opposite. I’ve personally sourced designers from around the globe, who I often discovered from Instagram and Tumblr. It also helps to envision the pieces in the store and on the shelves and whether or not those items can hold a conversation. I launched t.a. to provide shelf space for brands that aren’t normally found in today’s retailers, so it’s a necessity for me to feature different talent and perspectives from both well-known and up-and-coming POC-owned brands. My favorites constantly rotate, but I am so excited to share that I worked with founders of  ASHYA, Ashley and Moya, to create an exclusive bag Shema Slingback, named after my mother.

WHAT ARE SOME OTHER BRANDS THAT YOU’D LIKE TO SEE IN YOUR SHOP?

WHO ARE THE WOMEN WHO INSPIRE YOU?

I’m inspired by those who are unapologetic about their desires and their beliefs. That includes my mother, Sade, Diana Ross, as well as other young Black female entrepreneurs that continue to thrive when all of the odds are stacked against them.

DO YOU FEEL THAT IT WAS DIFFICULT AS A BLACK WOMEN TO GET BRANDS TO WORK WITH YOU OR RECEIVE THE FUNDING YOU NEEDED TO START YOUR SHOP?

There are a lot of challenges that came with opening t.a. that are separate from being a Black woman. Those obstacles excluded, yes — there were moments that presented themselves to be difficult because of the color of my skin. With that being said, I believe that opening my store as a Black woman provided me an advantage over whatever retailers would be deemed as my competitor. Meaning, as a young Black woman I was raised to be expressive, I was placed in rooms where flavor in reference to decor and style was prominent, and I was also raised with a work hard mentality. Because of the aforementioned circumstances, I was able to push through those moments of difficulty.

WHAT IS NEXT FOR T.A?

We’re transitioning into our FW20 brand matrix! Aside from a few, we’re carrying completely different brands, which I personally shopped prior to our opening. I’m excited to feature them in-store. Additionally, I aim to expand and co-create with other retailers that are intentional in regard to their buy and approach to luxury retail.