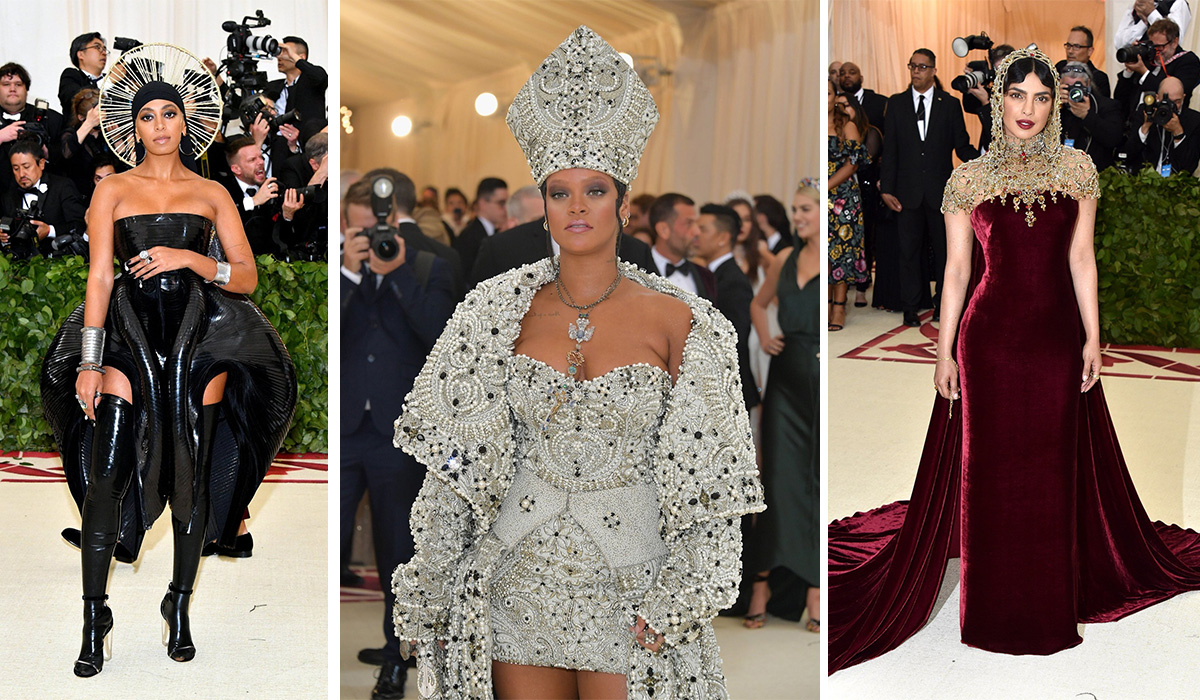 The fashion extravaganza of the year went down this Monday and NBGA is here to recap who came to slay. The Met Gala and its extremely exclusive guest list is helmed by Vogue’s Anna Wintour, and her not-so-low-key co-hosts this year were Amal Clooney, Rihanna, and Donatella Versace.

So what exactly happened at one of the most talked about, star-studded annual events this year? Well, Rihanna showed up dressed as a bedazzled pope and pulled it off like she was in her most natural element. Nobody is surprised. 2 Chainz went down on one knee to propose to his longtime partner, Kesha Ward (for the second time?) Virgil Abloh debuted a new Louis Vuitton suit, looking dapper as hell, Elon Musk and Grimes showed up as a very unexpected couple, Madonna surprised the guests with a dramatic performance of “Like A Prayer”, and Solange wore a durag as part of her holy ensemble, making her the realest MVP if ever there was one.

The theme this year was “Heavenly Bodies: Fashion and the Catholic Imagination,” which resulted in some pretty divine looks. Celebrities went ham and pulled up to the red carpet wearing what would be described as installations rather than gowns, as expected at the Met Gala. We have listed our favourite, most memorable outfits, and let me give you a hint… Selena Gomez and her spray tanned hot mess of a look didn’t qualify for it. Read our list below and gasp at the sight of these incredible creations!

Rihanna reigned supreme at this year’s Met Gala, as per usual. I mean at this point I feel like they should consider re-naming the entire event the Riri Gala. Just putting it out there. With the theme being Catholicism, only Robyn would go all the way and dress as a Pope… she really did that. Outfit designed by Maison Margiela.

SZA confirmed all our suspicions that she is, in fact, an angel, in this Versace tulle gown. It’s her first time attending the Met Gala, and I definitely hope it won’t be her last.

I’m still processing Priyanka Chopra’s look from last year, which was the most dramatic trenchcoat ever made. This year she wore a Ralph Lauren velvet gown with a gold beaded hood – a gorgeous outfit that was very in line with the gala’s theme.

Winnie Harlow wore a Tommy Hilfiger dress and a headpiece to die for.

Who knew Zendaya would turn out to be one of the Met Gala’s most anticipated attendees? This year she showed up dressed as one of Catholicism’s most iconic saints, Joan of Arc, in custom Versace armour. I’m dead.

Okay Jaden Smith’s Louis Vuitton trench coat over a t-shirt from his own label, MSFTS, isn’t that much to write home about. But the fact that he brought the gold certification of his album ICON as an accessory made him just that, “an icon living”.

Jourdan Dunn looked amazing ofc in this Diane von Furstenberg creation. But what I’m really here for is her dreads. Ethereal af.

Kendall Jenner wore a tasteful yet rather tame Off-White ensemble. She attended together with the designer Virgil Abloh, who used the red carpet as his runway to debut a Louis Vuitton suit and a pair of Off-White Jordans.

The Migos showed up wearing Versace and omg this is great.

So Zoë Kravitz’s Saint Laurent look was a little too boring for the Met Gala IMO, but nevertheless, it’s Zoë Kravitz and she’s a fashion force to be reckoned with.

Lena Waithe came through sporting a Carolina Herrera pride cape to an event with a Catholic Church theme. Iconic and bold to say the least.

Although playing it a little too safe, this 90’s inspired Versace dress was just beautiful. I was especially feeling Kim Kardashian’s hair and bold eye makeup. Kanye West, however, couldn’t make it to this year’s gala…

Chadwick Boseman was one of the best-dressed males at the event and for that, I am very grateful. Outfit by Versace.

Cardi B definitely came through dripping in this embellished Moschino gown. One of my favourite looks of the night.

Solange was serving celestial looks in this Iris van Herpen creation, showing all other attendees how it’s done. I feel like the Met Gala basically starts and ends with Rihanna and Solange. As with this list.

Now all that is missing for this gala to be complete is Beyoncé. Unfortunately, Bey is taking some time off before her next tour so we’re gonna have to make do with everyone else. Besides, she already served looks reminiscent of this year’s Met Gala theme at last year’s Grammys. That’s just who she is. Five steps ahead.