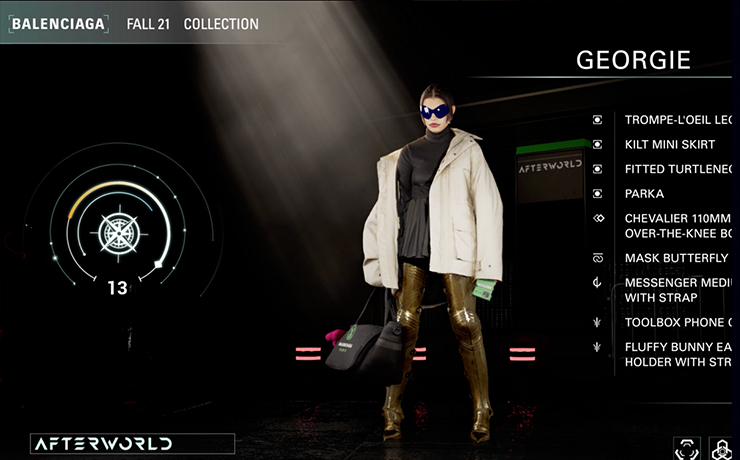 Who is MARINA now? Exploring the popstar’s changing legacy

People have been curating online existences and digital selves since the advent of simulation games like The Sims (an escapist paradise if there ever was one). They’ve done the same in chat rooms and forums with personalized avatars on platforms including IMVU and Second Life — especially considering how these sites allow for the gain of cryptocurrency that can be exchanged for tangible funds. With increasing integration of media across platforms, there’s been a more recent phenomenon of using CGI-enhanced subjects in lieu of humans and it overlaps with our consumption of popular culture now more than ever. From dead celebrity holograms to supermodel “robots” and video game characters in fashion editorials, it’s increasingly becoming uncanny.

The uncanny valley is a phenomenon describing the moment in which robotic and digitized replicas of people fail to achieve reality — it’s basically the point when the illusion falls flat. It’s at once intriguing and uncomfortable. For example, the site This Person Does Not Exist takes found images of two people to create a person that cannot be found in the real world. It looks mostly realistic until it sets in that the reaches of technology are blurring the lines of how we perceive humanity. From there, a primal sort of fear sets in. The New York Times recently presented an artificial intelligence system they developed to test the pervasiveness of this technology and the public’s perception of it. What typically gives the digitally-rendered person away is the mismatch of accessories like glasses or earrings.

Advancements in virtual and augmented reality have enhanced our ability to imagine the fit of clothing from a smartphone and project prospective furniture into a living space to check the dimensions before purchasing. Looking more specifically at the realm of fashion, there’s been innovations in how designers present their collections, especially during the pandemic when people have had to test the limits of their imagination from a social distance. There was Hanifa’s notable Pink Congo Label collection featuring intricately-draped curvaceous 3D body forms walking a virtual runway. Most recently, I discovered a digital modeling agency titled Gen V that was founded to address the concerns of safely using models amidst COVID-19. Looking just a few years back, there was an instance of Louis Vuitton using Final Fantasy character Lightning as a model that foreshadowed this turn of events. This context is starkly different from the reception of the 2001 film Final Fantasy: The Spirits Within that was uncanny for viewers due to the heavy CGI and mechanical movements that fell flat in terms of conveying sentiments.

3D models aren’t super new to the fashion world but they are becoming more popular. Since 2016, digital influencer Lil Miquela has led full editorial campaigns, released pop singles, and been presented as an emotional being with complicated relationships and star-studded adventures. For the longest time, it was even speculated that Lil Miquela was an actual human with visual effects to appear digitized. It seemed like a futuristic case of human melding with technology until an official disclaimer of her computer-generated origin was issued. The way in which this digital avatar has been received (with a current following of over 2 million on Instagram) highlights its creators’ ability to pinpoint what would be relatable to the zeitgeist. Critiques of Lil Miquela and other 3D models is that they occupy space for capital and opportunities in a creative landscape where marginalized creators are often exploited. On the other side of the screen, someone had to thoughtfully program these creations and is therefore gaining from this experimentation – so there’s always that to consider.

A common concern of robotics and 3D creations has always been that the beings will grow sentient and revolt against the humans who have engineered them. There is also a question of whether or not it’s up to humans to maintain control of these beings if they do become conscious. On a related note of morality, what about the ethical conundrum surrounding stars like Whitney Houston and Tupac being commissioned to tour from beyond the grave? There’s also that viral video of Kanye gifting Kim Kardashian a talking hologram of her deceased father for her 40th birthday. The company that supposedly claimed ownership of the Robert Kardashian hologram could only get so close to capturing the late patriarch’s voice because he never actually spoke those words. After a friend of mine likened the posthumous holograms to a form of digital taxidermy, I can’t unsee it to a certain degree. To be frank, I have a similar visual processing dilemma assessing digital facial filters and extensive plastic surgery in which bodily proportions become otherworldly. Recent research indicates that people are becoming so enthralled with their filtered visages that they are using these images as inspiration for their surgical doctor visits — dubbing it “Snapchat dysmorphia.”

In 2020, we’ve witnessed an aesthetic return to the Y2K era, a time that at the turn of the millennium was presumed to be the end of the world as we knew it. Of course, we’re here twenty years later and while that prediction was not fulfilled in that exact way, the tides of 2020 have put many in that existential headspace. Music videos by artists like IAMDDB, Arca, and Ariana Grande have explored both the apocalyptic and the optimism apparent in the expansiveness of technology. Grande’s “34+35” specifically presents a femme bot/mad scientist dichotomy that’s so telling of our relationship to creating a digital self to fulfill our desires. And if we examine further into the past, we can see how 20th century science fiction predicted we’d either have technological convenience at our disposal (i.e. smart houses and cars) or be living in bleak, apocalyptic times because of it; this latter part is currently debatable depending on your philosophical allegiance.

For many people, that bleak future is now. Considering that technological advancement and social progress has never looked the same globally, some people are already inhabiting a vastly different timeline from others. I’ll never forget when there was collective panic that December 21, 2012 would (once again) be the end of human existence; to quell my curiosity, my grandma said to me that “it’s the end of the world for someone every day.” While it sounds fatalistic, in retrospect, this blunt sentiment honed in for me how we all exist in multiple realities at once. And that despite our capability to envision far into the future, realistically, we can only be conscious of our present moment as we experience it — and that unfortunately, everyone inhabits this differently and it can change radically in the blink of an eye.

Hence, it’s possible that you’re experiencing reality in a different dimension from others. There has always been thoughtful theorizing on humans as cyborgs or otherworldly beings. The mental school of Afrofuturism stems from Black people imagining themselves existing in the future in a multitude of ways outside of the mainstream culture — Black fashion heavy hitters often use this philosophy in profound sartorial ways. There’s also scholar Donna Haraway’s 1985 Cyborg Manifesto, which explored the limits of feminism, rejected the notion of gender essentialism, and is often considered a posthumanist text. Fans of popular media like Black Mirror and The Twilight Zone or cyberpunk anime like Ghost in the Shell, Akira, and Serial Experiments Lain know that many series have even predicted the parasitic and dangerous situations that can occur with abuse of technology.

As humans, we’ve long been obsessed with the potentially grim prospect of the future and our relationship to technology as our survival depends on it in an ever-evolving, digitally enhanced landscape. In the midst of writing this, a notification from a popular astrology app appeared on my phone that read “give yourself permission to admit you’re a robot.” I was perplexed (definitely a little shook by the timing) and simultaneously in agreeance with the sentiment. It spoke to a sense of monotony and conformity that informs the society at large and how we are creatures of habit curating our own ideal existences outside of the physical world. If that’s the case, what is about our own corporeality that we are running away from? Are we chasing a form of unattainable perfection in terms of aesthetics? Or is this all just a precursor for a continual and inevitable blurring of virtual and reality?