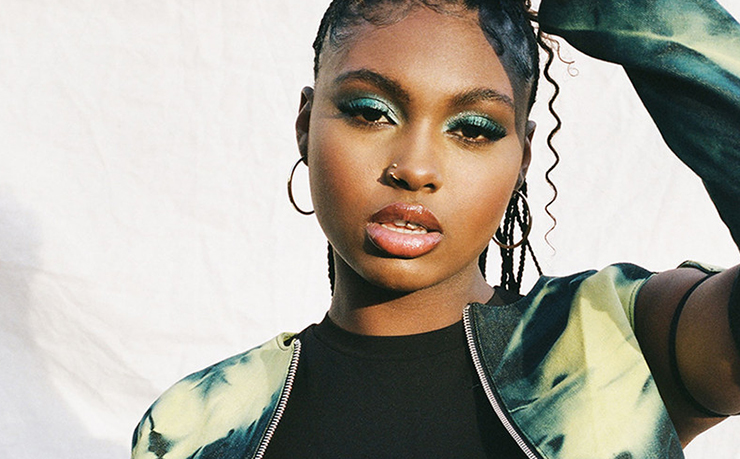 Ladies, what in the world is oxygen therapy?

If you haven’t familiarized yourself with the musical stylings of British singer Tiana Major9, the time is now. It’s highly likely that you’ve previously heard her vocals in the blockbuster film Queen and Slim, as her single “Collide” with Atlanta rap duo EARTHGANG was featured on the soundtrack. The dazzling and stylish Motown signee recently chatted with NBGA about her latest EP At Sixes and Sevens — she also filled us in on her dream concert and why the 1990s is her favorite decade to reference for fashion.

The term “at sixes and sevens” is a colloquialism for being confused or in a state of disarray. On her EP of the same name, Tiana unpacked some of her mixed feelings on romance and self-love and when we spoke over Zoom, she revealed she’s in a good headspace. What aided in her personal evolution was having awkward and challenging conversations with loved ones and conducting research on healing. “Going on YouTube and listening to people talk about meditation, crystal healing and what it actually means to love yourself…that helped me a lot,” she told NBGA.

Since sharing the EP with the world, Tiana said she’s learned so much in regards to self-compassion and having more understanding within her interpersonal relationships. Wellness is also an integral theme of At Sixes and Sevens — in between the ballads, you’ll find soothing and affirmational interludes. The EP opens with a guided message on accepting one’s emotions; Tiana’s soft speaking voice sets the tone for the listening session and serves as a reminder to stay calm and be present.

At Sixes and Sevens is a standout project full of sensual melodies and lovelorn lyrics. The track “Lucky” describes love in a way akin to winning the lottery, while “Same Space?” refers to that moment of being at a crossroads in a partnership, where things are stagnant but you tirelessly hope for change on the horizon. Tiana’s music melds inspiration from R&B, soul, jazz, and reggae, which ultimately creates an influential and timeless sound. Her recent video for “Think About You (Notion Mix)” also showcased her Jamaican heritage and the blend of cultures she experiences as a Londoner. “We just wanted the video to feel not only Jamaican or Caribbean, but we wanted it to feel British as well. And I feel like that was achieved by the sound systems and the road side and just the overall vibe of the video,” she said. “I feel like my personality came out in that video.”

Even in black-and-white, the visual perfectly captured Tiana’s fun and eclectic personal style — which is influenced by the colors and patterns associated with the 1990s. A scroll of her Instagram will also leave you feeling sartorially inspired. “I really love color. I feel like a lot of people don’t really wear color…not like they used to in the 90s. Black people used to wear color, especially men. Like they’d wear bright colored suits, t-shirts and things like that. So I feel like I get my inspiration from the 90s,” Tiana said. She also enjoys recreating looks from her mom’s old photos. “I have a few of her hats and handbags, not designer, but cute little handbags that worked when she was younger.”

While Tiana pulls from a wide breadth of inspiration in her artistry, the singer expressed interest in becoming more involved with pop music — especially as a songwriter. “I would love to write a pop hit,” she told NBGA. She’s also recently gotten into K-POP and mentioned that “writing for a K-POP artist could just be incredible.” Overall, she remains open to the possibility to expand her sound even further.  “As I learn more about music and become a bit more diverse with my personal listening, I think there’ll be more genres that will pop up for me.”

Among her favorite artists currently on repeat are Lucky Daye, SiR, Lauryn Hill, and D’Angelo — always D’Angelo. “I say him all the time,” she said. Matter of fact, if Tiana could attend any concert in the world (past, present, or future), it would be a D’Angelo concert circa 2000. She happily shared that she’d be most excited to hear the R&B legend perform “One More Gin” in an intimate venue. “Probably in New York somewhere — I love New York. That would be a dream if I could time travel.”

When asked which song of her own she looks forward to performing post-lockdown, the answer was all of the above as she’s ecstatic to connect more with her audience. “I’ve been doing a lot of Instagram live concerts and digital stuff. But I haven’t really had the chance to experience my music around my supporters. I haven’t had the chance to experience their reaction to it and just be on stage, so I can’t wait to perform every single one of them.”

As far as what’s next for the 24-year-old singer, there are more visuals for At Sixes and Sevens to come. For newer fans, the artist herself recommends starting with her first EP Rehearsal @ NINE and tracing your way back to her latest release to get a larger scope of her musical journey. But keep your eyes peeled — she’s just getting started.