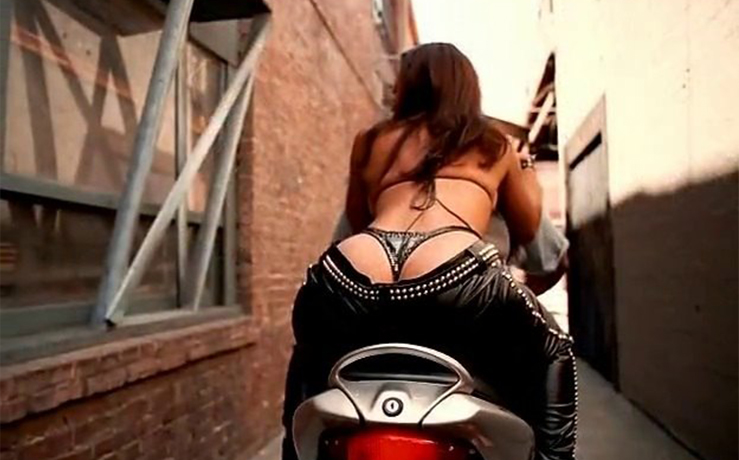 The underwear-as-outerwear trend reinvents itself every season. We’ve seen slip dresses, corset tops, and structured balconette bras take on both sophisticated and daring silhouettes in recent years. Considering the universal fact that style trends are cyclical, the revival of the notorious Y2K-era exposed thong was already mapped into the fashion forecast for 2020. The mid-1990s trends of visible sports bras, low-slung jeans and banded monogrammed boxers have already had their resurgence. It was only natural that we’d see the return of “whaletail” in this new decade.

It seems like it was just yesterday when Manny Santos of Degrassi fame (portrayed by Cassie Steele) walked down the halls of her fictional high school in hip-hugging bell-bottoms and a bedazzled thong; it was both a daring fashion move and a declaration of a new self. The whaletail is a sartorial statement that’s best accessorized with an unapologetic attitude, a certain je ne sais quoi. The women who have previously worn this exposed underwear trend have distinct personal styles that constantly evolve — think Gillian Anderson, Halle Berry, and XTina in her Stripped era.

The visible thong look has had many variations in recent years, both on and off the runway. Designer Alexander Wang revived the moment by way of muse Hailey Bieber at the 2019 Met Gala. Versace followed suit when the fashion house sent Bella Hadid down the Spring 2020 menswear runway in a sequined pantsuit and bikini. Maddy Perez in Euphoria (played by Alexa Demie) also foreshadowed the return of the trend when the character wore that iconic I.AM.GIA set with the peekaboo hips.

This current iteration of exposed undergarments evolved from the sexy utilitarian trend of the late 2010s that offered hip cutouts on athletic wear and tactical bodysuits paired with chaps (as seen at Chromat and Namilia, respectively). Miniskirts worn with hi-cut, V-shaped panties have been increasingly popular with late millennial and Gen-Z crowds that channel the early 2000s aesthetic, including the L.A. fashion brand No Sesso. Now, we’re seeing more people show off the G-strings and bikinis underneath their trousers — often wearing their lingerie with low-rise denim in stacked and baggy styles.

The trend also follows a recent stylish emphasis on the midriff; layered waist beads, chain belts, and crisscrossed, cropped blouses are just a few elements that can complement this polarizing Y2K look.

Let us know over on Instagram if you’ll be giving the whaletail style a try this time around!