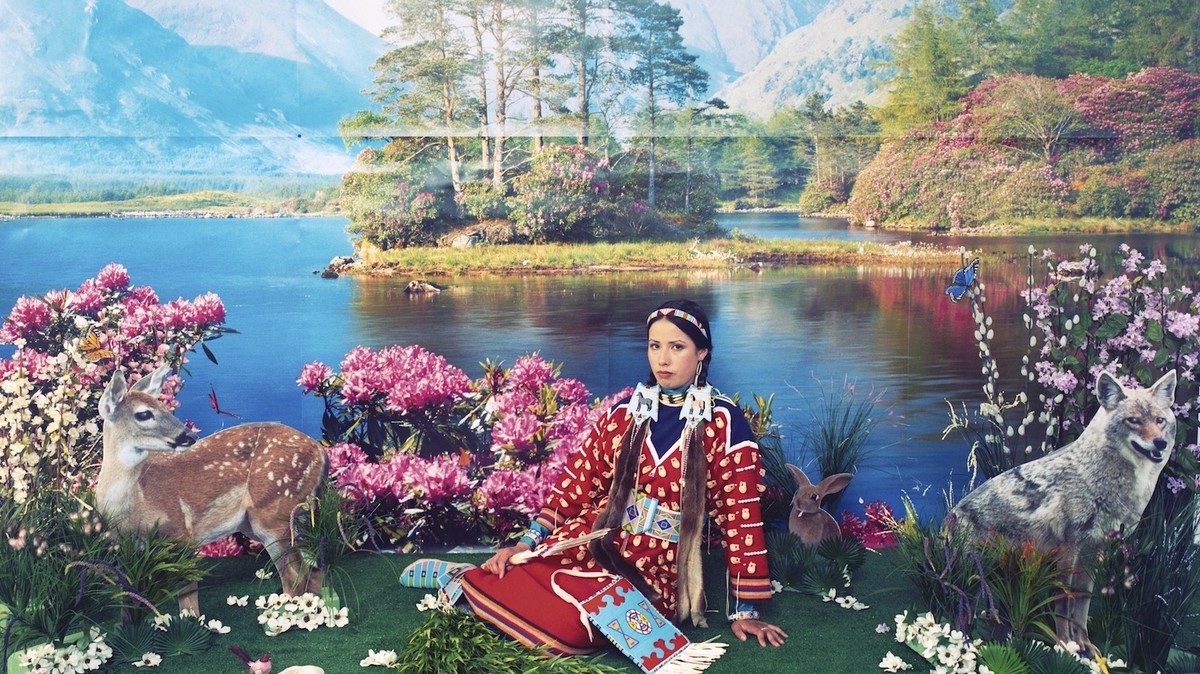 Wendy Red Star is drawing on her personal story to redefine Native stories through her art. Born in 1981, Red Star is a member of the Apsáalooke (Crow) Nation and grew up on its reservation in southern Montana. She works with multiple mediums to communicate a new perspective on her own history and America’s. Working with self-portraiture, photo-collage, and mixed media, Red Star unpacks themes of colonialism and tries to forge a space in the art world for the under-represented Native voice. She also works with sculpture, video, and fiber arts to explore her cultural heritage. Red Star holds a BFA from Montana State University, Bozeman, and an MFA in sculpture from the University of California, Los Angeles, and has since been working from Portland to bring her ideas to life.

The role of Native women is also something Red Star is passionate about integrating into her artworks. Her grandmother sewed traditional Apsáalooke clothes and created intricate beadwork, which Red Star has drawn inspiration from to inform her own artistic practice, working with traditional Crow garments and textiles. Her grandmother’s significant role in shaping her art is intertwined with Red Star’s Crow culture. The Crow Nation is a matrilineal society, which means that legacies are passed through the mother’s side. Red Star’s mother is white, so instead, she traces Crow history through her paternal grandmother’s side. From traditional practices like the sewing to an appreciation for the Crow outfits, Red Star continued this transgenerational exchange of knowledge, passing it on to her daughter.

While she works with serious themes, Red Star goes about it in a humorous way, including saturated, funny, and witty elements that are aimed towards expanding the narrative of Native culture and identity. Throughout history, there’s been a tendency for mainstream Americans to misrepresent Native stories. Red Star’s artwork manages to retell a lost part of people’s history by referencing colonialism. Her practice includes going back into history through archival research, where she often unearths black and white images of ancestors, posed and stoic. Her photographs are vastly different, capturing her own culture on her own terms, including color, emotion, and movement. In this way, Red Star’s work can be described as decolonial.

“I really try to talk about Crow culture, because that’s what I know best. I do a lot of research-based work and I think that education is important and the Native perspective hasn’t been shared at all. It’s a fresh story and it’s not pigeonholed. A lot of people will say, “Well, that’s just Native history.” No, that’s everybody’s history who lives on this continent. It’s about decolonizing the way people are seeing things”

– Wendy Red Star in an interview with Aperture, 2016

In her Four Seasons Series, Red Star purposely creates surreal scenes, using fake plants, painted backgrounds, and plastic animals that remind us of dioramas and museum setups. She goes on to populate these scenes with Halloween costumes from Target to characterize the “Native American people are one with nature” stereotype. The scenes are designed against a bright scenic Western landscape that she purposefully leaves wrinkled to express that they are man-made and artificial. She refers to the past (and perhaps present) tendency of Western museums to exhibit ‘exotic’ objects from cultures such as African or Native Americans instead of representing genuine ways of life.

Her artworks mock the stereotypes and simplistic perceptions of Native cultures. These stereotypes often come across in the form of sexualized Halloween costumes, bad festival outfits, and mascots. Red Star takes these stereotypes and turns them on their head, transforming her experience of mainstream society and life on a Crow Indian Reservation. It’s an interesting contrast that she explores through her use of self-portrait photography, drawing from old classic posters, and mixed media. While it comments on a history of misrepresentation, it also has the dual purpose of celebrating Crow life and culture. The Native American way of life and culture has always had a certain perception, which does not match up with reality. It was a romanticized image of Native culture that Red Star tries to dismantle and reconstruct through her own artwork.

Preserving traditional practices and stories by passing it forward to future generations is also part of her artistic process. Red Star collaborates with her daughter over multiple artworks where they combine their shared love for art and shared cultural heritage. The duo began their partnership by accident back in 2014, when Red Star’s daughter, Beatrice began coloring on top of Red Star’s printed photographs. For Red Star, her daughter’s artwork was unrestrained, free, and genuine: “It was her interpretation of these chiefs who were her ancestors, and it was a perfect way to include the next generation’s voice”. It provides Red Star with an opportunity to share the ever-important message of confidence and power to her daughter.

It also has got a lot to do with Red Star’s preoccupation with creating spaces for female Native artists to share their artworks. For her, supporting indigenous artists is important, especially since indigenous female perspectives are not often broadcasted on platforms. This interest in sharing personal perspectives is linked to Red Star’s identity-based artwork. It explores race identity and gender, themes that are as important now as ever, but still not receiving the screen time they need. To highlight some of the conversations she is championing, Red Star created a hashtag #ApsaalookeFeminist, to mark all the artwork she creates that speaks to historical and contemporary experiences of Crow women.

Her works are thought-provoking, using humor and classic images of Native life to weave an alternative, more authentic story of a changing unique culture. What is often glossed over is that there is no one Native identity or culture (as we may have been led to believe), in fact, it is highly personalized and unique depending on nations and regions. “We’ve lost our individuality as different nations. We were stereotyped into one thing”. Humor plays a key role, not only in Red Star’s artwork but also in her daily life. It’s a universal antidote that brings joy and lets viewers connect with her work over a shared emotion. Connecting with messages, such as those explored in her artworks, is as important now as ever because her artwork represents stories we all need to hear.