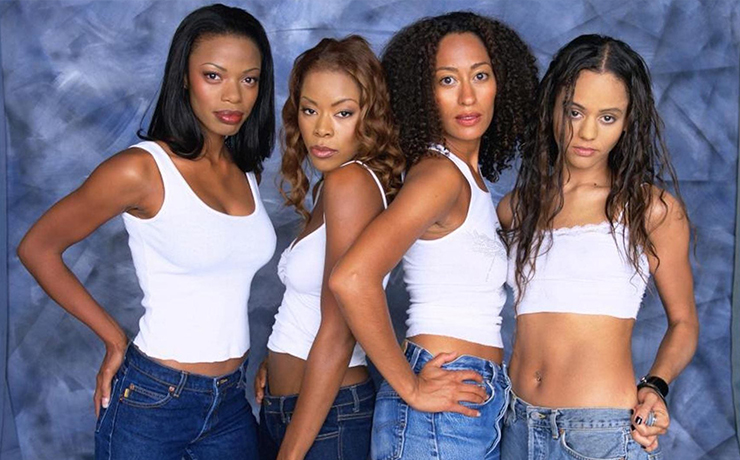 The show ‘Girlfriends’ has recently been released on Netflix and is it just me? Or has the theme song been running through my mind since I’ve started the show? I just finished season one and I’ve already learned so much, specifically when it comes to friendships.

What I like about Girlfriends, is that it’s four black women in their late 20s and early 30s going through their daily lives juggling work, relationships, and friendships. Others had Carrie Bradshaw and her friends, I had Toni Childs, Joan Clayton, Lynn Searcy, and Maya Wilkes. However, with four great fleshed out, characters came complicated relationships and a long list of problems. For example, the friendship that Toni and Joan have is far from perfect and far from “goals”. Since episode one, the audience is shown that Toni and Joan have a toxic dynamic when Toni brings Joan’s ex as her date to Joan’s BIRTHDAY party. And, to make matters even worse Toni doesn’t see the problem with dating her best friends ex nor does she tell her till Lyn FORCES it out of her. Yeah… from the jump the writers were warning us about the inevitable trainwreck that is Joan and Toni’s friendship.

The duo loves to emphasize on the fact that they’ve been there for each other since they were 8 years old, and have gone through every milestone, every heartbreak, and sweat for more than 20 years. They tolerate the constant arguments, jealousy, side jabs, and more because of their history. But, from what I can tell it seems like year after year their resentment grew for one another and blew up in their faces towards the end of the season.

To sum it up, Toni had a boyfriend, Gregg, that she loved very much but he wasn’t rich. Which is a huge dealbreaker for Toni because her character is known to be a golddigger. Because of this one flaw in their relationship, Toni cheats on him with a rich surgeon who purposes to her, and of course, she says yes. When she announces to the girls of her engagement Joan is concerned because she knows that Toni didn’t say yes because she loved the guy but because she loved his money. Joan didn’t think it was right that she’s cheating on Gregg and in the midst of him asking Joan for advice, Joan accidentally exposes Toni’s infidelity. This results in Gregg breaking it off with Toni leaving her to be depressed because she decided not to marry the surgeon to be with him. When Joan reveals to Toni that she’s the reason Gregg called things off, Toni bitch slaps her and attempts to seduce Joan’s boyfriend for revenge.

The season ends with that as its cliffhanger but spoiler alert, Joan forgives Toni. Why? you may ask, well it’s because “they’ve always been there for each other”. Girlfriends raise the question of if it’s right to hold onto a toxic relationship because of a history two people share together. Later on the show (spoiler alert), Toni and Joan’s friendship is no more and is soon just a relic of the past. The friendship that they fight so much for, despite the toxicity, is no more.

All in all, the show makes us face our own dilemmas, causing us to second guess the relationships we have in our own lives. Is it worth fighting for a dying friendship because of what it “used” to be? Are we looking at our toxic relationships with rose-colored glasses because we’re too afraid to face the fact that it’s not meant to be anymore? Maybe, some jokes hurt more than they used to, maybe hanging out with a certain friend feels more draining than fulfilling. But, it’s up to you to determine how long you’re willing to fight for a friendship for the sake of history.

Let the nostalgia set in: Moesha, Girlfriends and more black sitcoms come to Netflix this fall