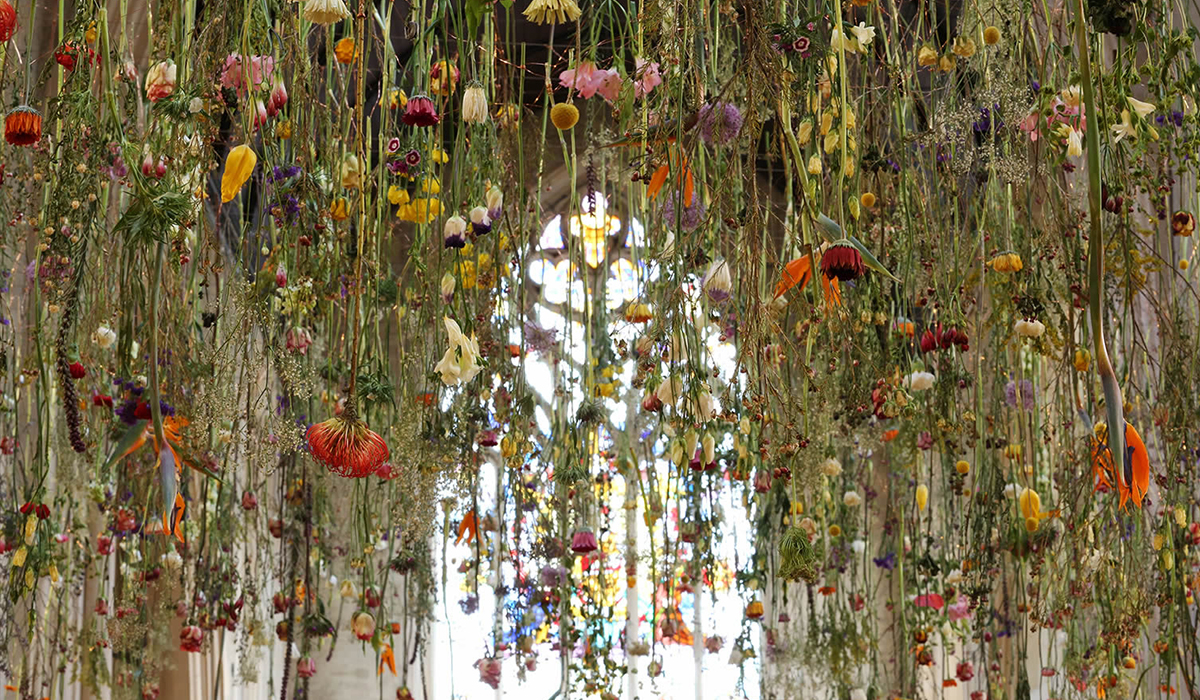 With so many creatives making stunning works of art out there, we often gloss over artists from the countries and faraway locations we have never visited. This is felt most of all when it comes to installation art. Since its all about being there, at the moment among the structures, experiencing the art in person. Unfortunately, we can’t be everywhere at once, even though we wish we could teleport. But at least we can appreciate some of the work of a few of the women around the globe from afar. So I’ve compiled a world tour of some of the phenomenal women creating hard to miss installation art.

Sheela Gowda is an Indian artist, born in 1957 and lives and works in Bangalore. She is influenced, primarily by her own observations and experience of daily life in India. Sheela draws on religion and superstition, local traditions, and ways of life that she experiences. The materials she uses are broad and all collected. They are both common and symbolic materials. She pays attention to the ritual context of the material as well as the process and technique used to work with it to create dramatic sculptural installations.

One key installation currently on display at Tate London is ‘Behold’. It’s made up of contrasting everyday materials sourced from the streets of India. There are ropes of human hair and steel bumpers from cars that create intricate patterns against the walls. To make sense of her choice of materials, it’s key to realizing the hidden significance. Some Indian taxi drivers tie locks of hair around their bumpers. The hair talisman is for good luck. Gowda expresses this clash of belief and everyday working life by her choice in material. The hair itself is sourced from Hindu temples where Hindu devotees sacrifice their hair to deities as a sign of devotion. The use of hair has an additional layer of significance. Since human hair is a key export from India as well as a lucrative business to make high-quality wigs, Sheela uses 400m of human hair to highlight the relationship between India’s economy and its faith.

Mary Sibande is an iconic South African artist. Born in Johannesburg in 1982, she was inspired by South Africa’s past and more visibly the women in her family. Mary’s works use bright, highly pigmented colors to represent different periods of South African history and evoke certain emotions. This evolution of color can be seen throughout her works where it is complemented by an appreciation of history where she is able to unpack the notion of identity and the current political climate in South Africa. Mary covers themes of race, gender, and labor all the while using a mixture of fabric and fiberglass to create snapshots of moments caught in time.

The figure is a woman that features prominently throughout Mary’s works. Her name is Sophie and she has lived the life of a maid during the apartheid regime, a soldier, and occupied more regal positions like queen and priestess. In her stunning installation piece titled ‘They Don’t Make Them Like They Used To’, Sophie is dressed in a blue maid’s outfit. The very same outfit that the artist’s mother, grandmother, and her great-grandmother wore during South Africa’s apartheid regime. By replicating pieces of history in her works, Mary is able to reframe and question South Africa’s past as well as its present post-apartheid identity.

Tanya Schultz is the Australian artist behind Pip and Pop, the creative mind that creates colorful immersive installations of candy. While sweets are her main medium of choice, she also incorporates various other materials like glitter, fake flowers, and collected bits and bobs from around the world. Pip and Pop’s intricate designs are eclectic, chaotic explosions that explore ideas of utopia and paradise. This comes across in her psychedelic designs which also make viewers question notions of abundance and pleasure. Her installations are the embodiment of a sugar rush.

In her 2016 installation called ‘When happiness ruled’ Pip and Pop invite viewers to travel through a sugared wonderland of islands. If you look closer, there are tiny objects made from clay, beads, icing, and wax. Usually dusted over with a layer of glitter. Her style is characterized by its pastel tones and meticulous constructions, all seem to bring to life folktales like Hansel and Gretel. The installation itself prompts you to zoom into the small scenes to appreciate the details but also allows you to enjoy it from afar as explosions of pink. In total, a crazy 400 kilograms of dyed colored sugar, glitter, sequins, and collected objects were used to create ‘When Happiness Ruled’. Though it appears at first glance as a wonderland, Pip and Pop weaves in giant pastel monsters to perhaps highlight the darker side of sugar: “It’s a beautiful material, because it has this sort of sparkle, but I also love that it has this empty promise.”

British installation artist Rebbeca Louise Law is renowned for her large scale, site-specific natural installations. Featuring fresh and dried flowers, and other natural materials, she creates immersive experiences that explore the link between people and the natural world. Rebecca draws inspiration from her surroundings. Each flower is chosen for its symbolism and is deeply rooted in the culture of the country its sourced from. The flowers are often suspended with copper wire to transform their various locations into an indoor secret garden. Rebecca celebrates the flora and natural change since her works embrace and capture the entire process of freshness to decay. Sustainability and preservation are themes she covers through her works, as well as ideas of temporary beauty.

In ‘Community’, one of her iconic installations, Rebecca combines local fresh flowers with repurposed dried flowers from previous installations. Her massive feats are not achieved alone. This particular work took 1,650 volunteer hours to create. Since it was created for a museum in Ohio, the flowers and flora were sourced from the surrounding region. In fact, Toledo Museum of Art managed to integrate plants from the museum grounds including pressed pear and oak leaves, fruit of the American sweetgum, fertile fronds of the ostrich fern, sawtooth oak acorn caps, honey locust bean pods, spruce cones, pine cones, seed heads from miscanthus grasses, pampas and northern sea oats, and annabelle hydrangea heads.

Leslie Pearson is a fiber artist of sorts born in the United States. Working through multiple mediums, Leslie’s installations are defined by hanging earthy-toned organic shapes. She used fiber-based materials to investigate themes of identity and memory. But her works are not limited to these ideas. She also uses her installations as a medium to communicate her everyday experiences. Her creative process is rooted in narrative practices, like journaling where she can conceptualize her artworks. These themes are also threaded through her inspirations, where she draws on people’s stories and objects with a history. These include old objects like stamps and bits of fabric. She’s also inspired by other forgotten items like animal bones and letters that tell a lost story of a relationship. Concepts inform her exact choice in material, but generally, Leslie’s materials are collected and in some cases a little unorthodox. Like her use of hog’s gut.

One of her installations that uses this alternative material is ‘Incubation’. Its made up of gut and tissue paper, which is an unlikely combination. Visually it reminds viewers of natural organic forms like seeds, eggs, and nests which add an extra layer to her works. Its title hints towards a more significant meaning, where Leslie unpacks ideas of safety and protection. Leslie uses stitching and waxed gut to create three dimensional oddly shaped pods. It’s a practice of experimentation where Leslie is able to enjoy the process of discovery and creation without limitations.

Venezuelan artist Sol Calero is the creator of vibrant, colorful installations that celebrate Latin America identities. Drawing from her own culture and heritage, Sol challenges and rewrites Latin stereotypes and caricatures by filling her works with saturated solid colors, tropical fruits, and patterns. In this way, her work explores the long-standing relationship between America and Latin America. Her works come across as playful and colorful but with deep meaning attached. Now based in Berlin, she uses her daily experiences as an immigrant to comment on changing identities, memories, and notions of home. This combination of inspirations is what she tries to portray through her surreal and simple installations. She does this through a series of materials, ranging from fabric, paint, and found objects to create a site-specific work that is inviting and makes viewers feel at home.

One such installation is ‘Interiories’ where she transforms the gallery space into an immersive space with floor to ceiling cut-outs. In many ways, it’s essentially a three-dimensional version of her paintings, including swirls of green plants, fruits, and more abstract colored splodges. Culture plays a large role in her works, informing her choice in objects, symbols, and references. In this way, her artworks also explore cultural appropriation through a simple presentation. Often, Latin American cultures were portrayed as exotic and utopian, Sol manages to explore this through playful tactile references. This simplification of cultural elements creates a surreal experience, where viewers are led through a collection of vibrant social icons drawn from her own life.