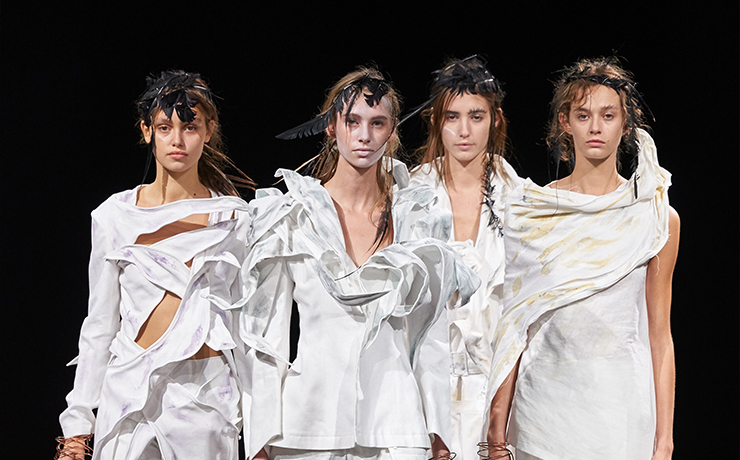 This season, Yohji Yamamoto distilled it down to what Yamamoto does best. It was in the 1980’s that Japanese designer Yohji Yamamoto brought his unique aesthetic and superior design skills to the streets of Paris, with the launch of his label. Almost 40 years later, the self-titled brand held it’s Spring/Summer 2021 show in the gorgeous and gilded Salles des Fêtes of the French capital’s city hall. A setting which made for the perfect juxtaposition to the entirely black and white collection.

The only Japanese brand to hold a physical show this season, the show was presented to rows of masked faces, many of who were, sensibly, dressed in black (no doubt as a nod to the designer’s taste and history).

The collection opened under the ornate chandeliers, with a series of crinkled, black-and-white outfits on models who sombrely made their way down the runway. The first third of the show saw a focus on draping. Wrinkled, sheer fabric  draped, wrapped and hung from the models shoulders. Variations of fluid, black duster coats were followed by the more avant-garde. Structure and volume was gradually introduce as the models slowly sauntered down the black runway to the music, which switched between an eery, transcendental tune and a slow, pulsing drum beat.

The hypnotic pace of his shows remind one to slow down, inhale, and take in the artistry, the unconventional fabrics and silhouettes. And it’s a reminder we need as we all do our best to navigate the pandemic. The slowed, emotional, melancholic vibe to the show is somewhat of a contrast to Yamamoto’s recent collaborations, such as his capsule line with Supreme.

The finale saw a series of gowns, intricately knotted, draped, and twisted.  I mean, few in fashion history have ever draped as well as Yohji Yamamoto. One dress featured a twisted copper-wire frame, while others were reminiscent of of decaying petals or leaves.

Yamamoto’s work speaks for itself. As does his near half-century long career and dedicated cult-following. His use of volume, varying textures, and drape create indistinguishable movement in his pieces. Today, which just so happens to be Mr.Yamamoto’s 77th birthday, we toast to his radical design approach and dedication to the craft. Happy birthday, Yamamoto-sensei!