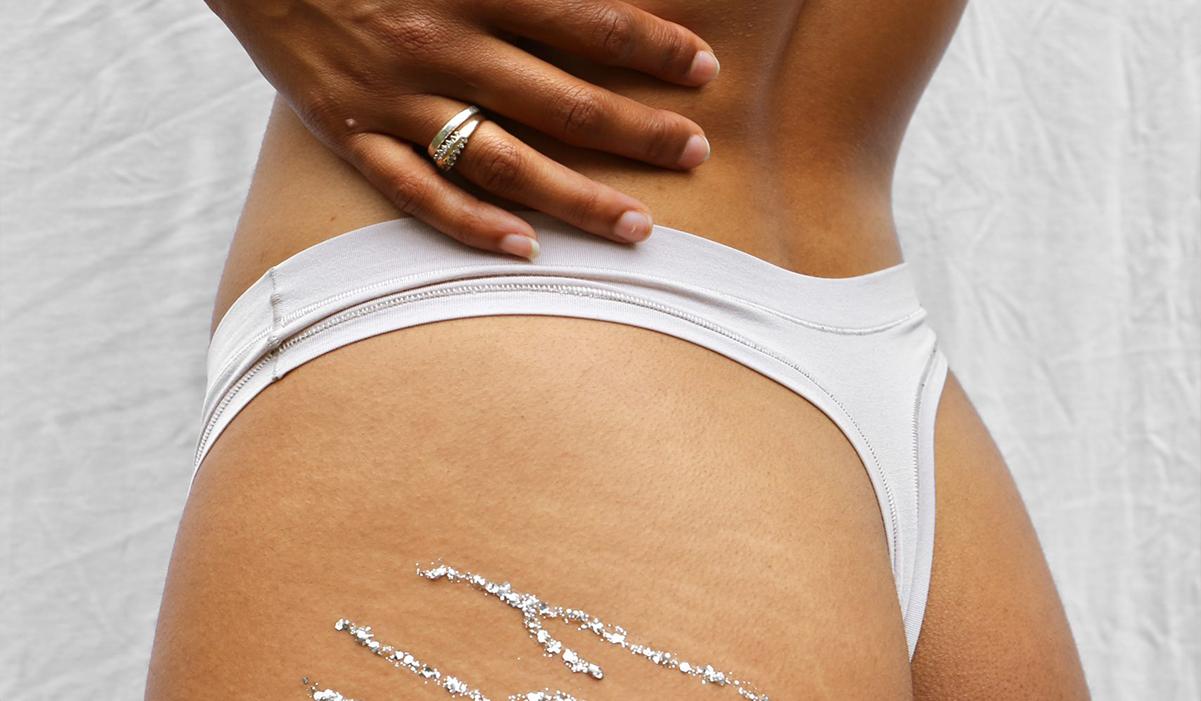 Megan Thee Stallion is warming up for another #HotGirlSummer

Deconstructing ideas of what women need to feel beautiful, the rigid beauty standards that apps like Instagram perpetuate and the need for validation based on what we look like is what characterizes a platform like @strengthmarks. Living in an era where it is important to revere and celebrate what it is that makes us different, it’s shocking – yet not unsurprising – that we still have a ways to go when it comes to representing bodies in all its glorious forms. Stretch marks and scars are probably one of the most universal marks we get on our bodies.

Many of us at some point during puberty will get graced with stretch marks along our hips, arms, legs, breasts and bum; for everyone, male and female, our bodies are changing all the time. This universal experience of garnering these marks piqued photographer Zelda Elisco’s interest in capturing them decorated in a unique way, “I felt like there needed to be some sort of art created around this, or at least a space where we can start changing the conversation.”

Inspired by her own personal experience with self-love, coming to terms with the changes of puberty and re-learning how to love her body through these changes, @strengthmarks became a tool to help other women in Zelda’s life who were also experiencing these issues – “growing up with women who just didn’t appreciate themselves, see themselves or value themselves in the way I saw them and loved them, I decided to start a campaign that would create a space for all the women in my life to begin this self-love journey.” Thus she decided to decorate the scars and marks of her loved ones using glitter. A simple act that demands us to rethink the way in which we view these ‘flaws’.

“When I first discovered my stretch marks my reaction was very typical, which was: ‘How do I get rid of them? What’s wrong with me? What’s the solution?’ and over time and over this campaign you realize that that attitude has to change,” she comments. This speaks volumes to the fact that there’s a huge amount of pressure, especially on social media, the big screen, and in advertisements, that people, and women specifically, should always be on the lookout for ways to alter, manipulate or fix things about themselves. In many cases, on the surface, it can appear to be empowering because you always want to look your best, but the problem comes from being made to believe that your best self can only be achieved by changing something about it. Ultimately, Zelda had to unlearn these behaviors in order to really embrace the true meaning of self-love, “now when I look at them they look exactly the same as when I first got them, but I adore them now. They’re very special to me because they’ve remained the same but my perspective has changed.”

“In the beginning it was really about changing each of the perspectives of the people that I cared about, but then ended up growing into this community who began supporting all of these beautiful people that I was photographing and it kind of just grew from there. It was really cool, very unexpected, but it’s been incredible!”

The community that has been born out of Zelda’s efforts, is truly transformational in terms of how people are starting to connect with each other and see themselves in her photography – under her photographs you will often find women musing that seeing a scar similar to theirs has given them a whole new perspective and the boost they needed to see the beauty in their own marks.

Identifying that one reason why women, men and adolescents may get insecure about stretch marks is because they just aren’t visible in the everyday media we’re exposed too, “when you’re growing up as a young woman, or even as a young person, and you happen to get stretch marks, you get ashamed because you’ve never seen them normalised in mainstream media or talked about. I think it really comes from our culture and the only way to normalise it and for people to become more accepting and kind to themselves and others about it, is just to put it out there in the circuit of what you’re exposed to.” And that’s definitely changing. People are becoming more conscious of what they expose themselves to online, and are opting to go without content that has a potentially detrimental effect on how they view themselves and others,“there’s more and more of that in the body positive culture that we have now. The more colour we can paint and expose younger generations to, the easier it will be on everyone to be accepted and accepting.”

Although a lot is being done to streamline social media into a more body positive and inclusive space, it doesn’t come without its teething problems, “the body positive movement is just starting, but there’s still so much work to be done,” Zelda states, explaining that in the comments of one of her photographs people were not focused on the stretch marks or changing the narrative on body positivity, but instead brought the attention to criticising the models’ body hair. “It’s like we’re willing to accept some things but the moment you cross a different line, it’s like where did all the body positivity go? Why are we focusing on that, and on creating negative space for another whole issue, you know. It’s like once we’ve started to accept scars, we have to go through a whole other part of the body to fight for!”

It’s important to acknowledge that movements such as the body positive one are definitely making waves and striving for better representation, however, it would be wrong to say that the work is done. The body positive movement, as with any, still runs the risk of excluding different types of people and bodies, “inclusivity is just as important as body positivity because, you need to be mindful of every type of person that’s going to view your content and view your project. It needs to be one of the driving forces behind any sort of campaign and media that we’re creating and it doesn’t even have to be just body positive. It could be in television, it could be in writing and any facet of our culture.”

Continuing to be a champion of the wonderful forms the body comes in, Zelda is hoping for @strengthmarks to have a long-lasting legacy to be shared amongst parents, younger generations, and children. The @strengthmarks artwork shop offers prints and quotes designed to be put up in your safe spaces, whether that be bedroom, office, or bathroom, as a gentle reminder to be kinder to yourself. Looking to the future she wants to bring the art and self-love messages offline and into a more tangible space where the community can really connect and come together, whether that be through events, a book, or a photography collection. By creating a space where people can reset, reevaluate and relearn what it means to be beautiful, Zelda challenges imposed ideals and encourages us all to fight against the stigma and shame that still persists in our culture today and for that, we thank her.