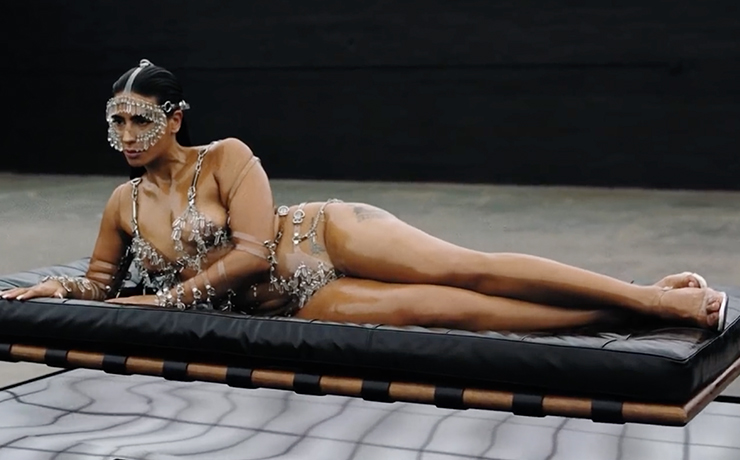 Days ahead of her 33rd birthday, Iranian-Dutch musician Sevdaliza gifted listeners with her sophomore album Shabrang. Exclusively produced by the artist and her longtime collaborator Mucky, Shabrang explores the depths of spirituality, identity, and power. The title refers to a black horse from the Persian epic poem Shahnamen. In translation, it means “colors of the night” — hence, the name of Sevdaliza’s live performance in support of the album. Colors of the Night — the artist’s only live show of 2020 — was recorded on August 31st at the Netherlands’ Royal Theatre.

For the production, Sevdaliza wore an exaggerated broad shoulder suit custom designed by Ninamounah with a set of black wings adorning her back. The suit recalled an early 1980s Talking Heads-era David Byrne with its maximalist silhouette, while the wings were a reference to Iranian photographs of nude feathered women from the 1890s. During the live rendition of her opener “Joanna,” she conducted her band as the black wings flapped dramatically behind her. Psychedelic projections of the artist multiplied her form, as they swirled, danced, and shimmered alongside her. The trippy imagery matched the visualizers that accompanied Shabrang’s release. Throughout the night, she took moments to switch out her props – shedding her wings while singing “Human” and later opting for a rose-covered mic stand during one part of the set.

In explaining her on-stage persona, Sevdaliza alluded to being “[John] Frusciante and [Marilyn] Manson’s queer child” through an Instagram comment. The photo in question shows her holding another decorative mic stand from Colors of the Night: this time, a white rifle. It’s evident in the expansiveness of Sevdaliza’s repertoire that she pulls from a wide range of inspirations and worldly themes. As an independent artist, she explores these different concepts by fulfilling different roles in her creative process: producer, songwriter and director among them. For the leading single “Habibi,” she co-directed a pensive black-and white music video with Russian director Anastasia Konovalova (the pair work collectively as sevda+ana).

“This album represents to me that the essence of it all to me is love. It is a deep letter to myself, my own bible I have to write in order to trust and believe in life. Trust in myself and my character as a human being.”  – Sevdaliza

Over the years, Sevdaliza has cultivated a distinct sound of dark electronic music — full of resounding vocal loops, auto-tune, and moments of sparse, deliberate production that bring emphasis to her often-existentialist lyrics. Throughout the album’s 15-track run, Shabrang builds off of her previously released work with themes of divinity, isolation, self-discovery, and heritage. On tracks like “Wallflower” and “Oh My God,” Sevdaliza speaks on embodying aspects of her subconscious identity — simultaneously representing herself as the underdog, the divine, and the muse.

Shabrang is the follow-up to Sevdaliza’s debut album ISON. With Colors of the Night, Sevdaliza animated Shabrang and used the performance to integrate various facets of her identity for the audience’s perusal. Sevdaliza recently announced her headline shows for 2021, so hopefully fans who missed out on the livestream will get a chance to witness the magic in action.

Listen to Shabrang in its entirety below.