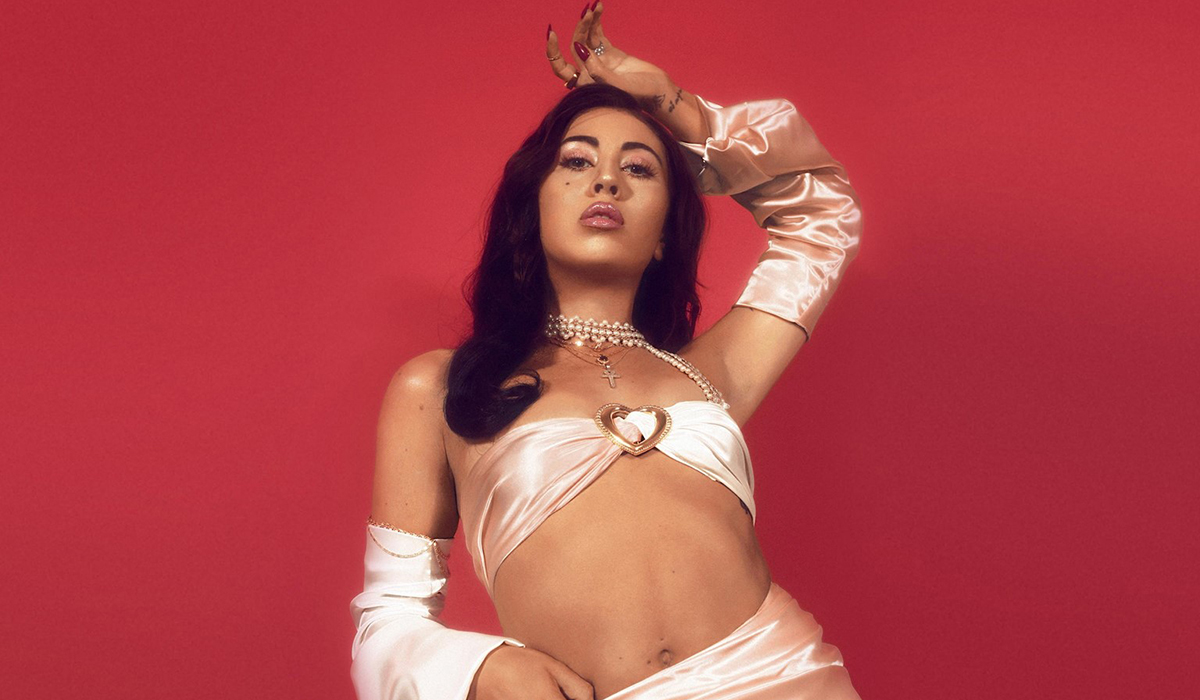 When Kali Uchis came to perform at the Melt Festival, NBGA got an exclusive chance to chat with the buzzed-about, already iconic singer. I was hanging out backstage before the show and managed to catch a glimpse of Kali Uchis right before she went on stage. She stood there with the most incredible posture while gathering her senses before stepping out in front of the huge crowd.

She licked her lips and walked out on stage with the most hypnotizing hip swing I have ever seen. She performed with an energy and sexual confidence that is so potent it gives you the chills. Her voice is soft and sweet, yet sung with a remarkable strength. She looked so at ease one would think she just got back from a vacation in the Bahamas, when in reality, she had been doing press in Berlin all day and was stuck in traffic for hours on her way here, all while being tired from jet-lag.

The show was delayed due to traffic and so I had to bug the management for a few hours in order get an interview slot after the show. When I finally got a chance to sit down and talk to Kali Uchis, she came down the stairs of the backstage area wearing furry slippers and a big T-shirt, looking very zen and relaxed.

She greeted me and sat down in a hammock to talk. Her voice was so soft and gentle that you had to concentrate carefully on every single word in order to hear what she had to say, which serves as a metaphor for her entire presence. She exudes an ease and calmness while her presence also makes it clear that this woman gets what she wants and knows what she needs.

We talked about being a loner, solitude, commercialism and success, and snapped a couple pictures in the afternoon sun before she had to catch a flight to London to do it all again…

I sense from some interviews I read that you really value solitude… I think that in our world solitude and being alone isn’t really appreciated but in my opinion, those experiences are the ones you learn the most from, so I wonder, what have you learned from being alone?

I think its a lot of different lessons that come from being in your own space and healing yourself and actually taking the time to reflect on stuff. If you don’t take that time, you’re constantly going to have people telling you what they think about everything and their opinions about whatever it is you’re going through. If you always listen to what everyone around you has to say you lose a lot of your power and your intuition and ability to actually be in tune with your higher path, ’cause other people are not going to be connected to that because it’s for you only… so I think that’s what being a loner has brought to my life in general, that I just stay on the path that I’m supposed to be on and don’t let myself get defocused or thrown into places that I didn’t want to go to.

Yea…kind of conserving your energy and personal space…

I feel kind of the same way about the idea of success we have right now. So many people just want overnight success without actually going all the small steps and developing their craft, which is something I feel when I perceive your art – that you really approach everything you do from the perspective of an artist who wants to develop and grow. Why are we so obsessed with fame and empty success?

I mean in general, most people want to do what’s easiest in order to get money, to get fame… If we look at so many of these big companies, they’ll have so much money but they will still do everything they can to use the least amount of money and the least amount of effort that they can to give the people the product even if it’s at the cost of people’s health, the cost of people’s lives. It’s just the way a lot of human beings are.  It’s just about your intentions – like do you actually wanna make something of value or do you wanna make something that’s going to get you momentary things like money or fame? Those things don’t actually mean anything to me.

I guess many people just see fame or money as intention…

My goal and intention always with making music is, when I leave earth what do I want to be left behind of me, what are people gonna say about me. I don’t want to be remembered as someone who did things that weren’t true to myself just to get money.

I think that’s one of the reasons why I really see you as an artist and not just as a musician. When I am at the receiving end of your artistic work it feels like everything you do is your expression, your video work, your photos, your way of dressing and music is just another piece of the puzzle. But yet many people only see you as a musician. Why do we still limit artists to one form of creative work instead of seeing them as multimedia creatives?

I think it’s probably the same reason why we feel we need to put everything into boxes. People are afraid of things that they can’t label or can’t understand and pin-point. If they don’t know what it is it’s weird to them… I don’t know… people get turned off by things they don’t understand. So I think it’s because of that. It’s a lot easier to sell something that has already been done and already been marketed, like, “oh she’s gonna be the next this” and “oh it’s like that.” It’s just a lot easier for the brain to process… it’s just a lazy way to make sense of something. I guess that’s just the game.

When I look at the music scene today I notice that it’s the easy, uncomplicated art that is also mainstream and commercially successful. But somehow you have achieved the balance of making music that is accessible enough to be valued by the charts while still staying true to yourself…

Honestly, when I started making music I just did it for myself and my songs and everything that I wrote about was just about my experiences that I never even thought of sharing with anybody. My friends didn’t even know that I made music because it was so personal and it was just for me. I wasn’t at a point where I wanted to share it with anybody. When I randomly decided to put out a mixtape, I didn’t expect for people to react the way they did and I didn’t expect for people to take anything from it. I was surprised by the messages of people who said they connect to my music… I guess it just kind of happens because at the end of it we are all going through the same things when it comes to those feelings of rejection or of trying to live your life without having the constant need to assimilate to society… these things that I dealt with are things everyone deals with growing up and things most people deal with at the root of their life. Everyone relates in their own way and can take something from it and apply it to their own life…

In a way, I think that so many people can relate to you because you really sense people’s energy and really are sensitive to everyone’s vibes and frequencies. Does it sometimes overwhelm you to be surrounded by so many energies and people bringing their vibes into your space?

Yeah I definitely have to know how to take certain measures to know when I need to step away and need to say nobody can be in my space right now. I have to be alone because sometimes, like you said, it gets overwhelming. I think everyone should do that, whether or not you know how much other peoples’ frequencies and energies affect you, it is very important to realize that the people you surround yourself with, all of their frequencies are touching you and touching you in different ways. So if you are constantly surrounding yourself with people who have toxic shit going on, or passive aggressive energy or tension, that’s going to affect you at the end of the day, because it is constantly rubbing off on you and it will block your blessings as well.

Where your energy goes, life flows.