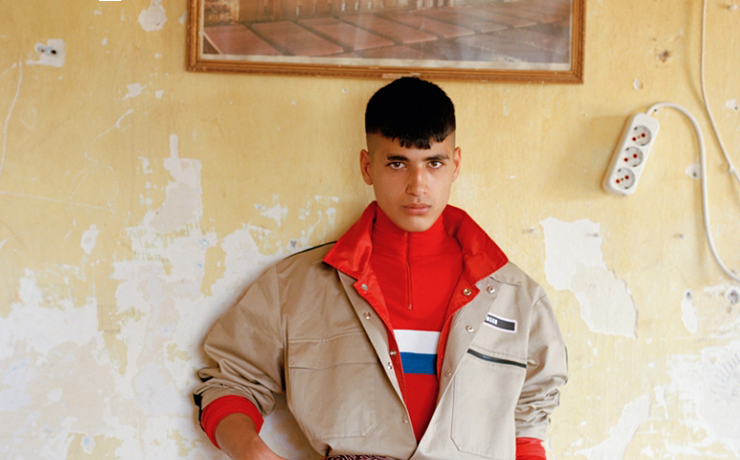 Photographs taken by Olgaç Bozalp depict a variety of cultures, countries and landscapes. From India to Oman and Jordan, Bozalp has traveled the world, and his photographs are a testament to that. The single consistent feature in his shots, however, is his joyful and exuberant father whose extroversion leaps off each image.

Listed on Bozalp’s website are the titles of three of his projects: “Dad and his Omani friends,” “Dad and his Indian friends,” and “Dad and his Jordanian friends.” Each one manages to capture the essence of the country he is in. Saturated hues, shots of natural landscape and his Dad’s friendly interactions with local residents make Bozalp’s photography enticing, causing the viewer to feel as though they’re peering into a cherished family holiday album.

In a recent interview with WePresent, the photographer discusses his upbringing in the small Turkish city, Konya: “I often felt a bit different, as if my personality didn’t necessarily fit into that small-town mentality.”

Bozalp remembers receiving his first camera at the age of 12 from his Dad. Growing up in a quiet city meant he was left to his own devices — quite literally — when it came to entertaining himself and keeping busy, “when my Dad bought a camera, I used it to record my sister and myself as different characters with different voices.”

Bozalp since has been included on British Journal of Photography’s ‘Ones to Watch’ list. His portfolio also features commissions from brands like Gucci, and Carven and has shot for Dazed and Atmos magazine more recently.

His latest trip to South Korea for Atmos is shared on his Instagram. Shot shortly before lockdowns were brought in around the world, his trip brings to light Sondo or the “Forbidden City” – a futuristic place created with identical buildings, “all elaborately programmed to accommodate the every need and convenience of its residence”. Sondo eventually turned into a ghost-town due to its cold, inhuman atmosphere, narrated Bozalp.

His mix of travel reporting and fashion photography is what has led him to catch the eyes of many. He often spontaneously casts his subjects, interviewing them on the street before photographing them, “once you get talking to them you can get an idea of their personality, and their life experiences, so I look for their identity when we start shooting,” he said to WePresent.

Photographing those he encounters on the street is perhaps what’s most interesting about his work. He is able to preserve the spirit of strangers through his lens — with some of his most notable portraits being of those from around the Middle East.

Whether a transvestite in Lebanon, or Iran’s new gen and their street style, his work helps diversify the visual output from the region and plays a role in reshaping preconceptions about that the Middle East with his refreshing explorations of gender, sexuality and beauty.