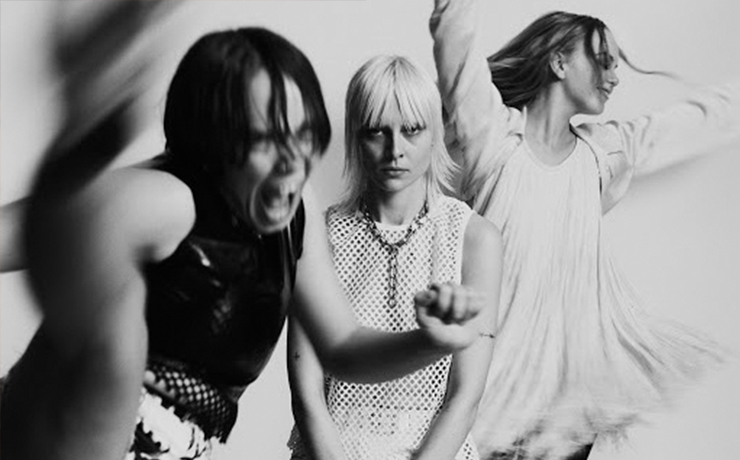 Over this period of isolation, many have felt docile, beaten down, and small: the result has meant that many of us feel out of place when we’re so far from our jobs, friends, and lovers. It was this feeling of isolation that prompted the riot grrrl movement in the 1990s.

Women created punk music, and yet they felt like strangers to their own community. This new genre of music – girl punk and riot grrrl – criticized the patriarchy, rape culture and emphasised the idea of girl power – something that now, more than ever, women need. These 5 albums have left more than one generation of women struck with passion. They’ll let you scream till your lungs are sore, even if it’s from the comfort of your bedroom instead of the club. If you want to be a riot grrrl, the first step could be Spotify.

So When You Gonna… by Dream Wife (2020)
Dream Wife are one of the most exciting bands of the new decade, and their sophomore album, So When You Gonna… is the embodiment of the second wave of girl punk. They have an all-girl membership, and used an all-female recording team for this album, meaning that their attitude of standing for and with women is echoed in their art. The single Temporary, especially, featured the struggles of women in ways that are often stigmatized: it was written for a friend who had had multiple miscarriages, and it’s the idea that this band are the ones in the corner of women who aren’t in the public eye that makes them so special. They’re definitely a band to watch out for.

Live Through This by Hole (1994)
Courtney Love was an outspoken woman, even by punk’s standards, and this was shown when she criticized the way men would grope her when she’d crowd surf at Hole’s concerts. This empowered rebuttal is reflected in Live Through This, as she speaks out on behalf of rape victims, those battling eating disorders, and those in abusive relationships. Whatever it is that you feel affects you personally, in part because of your identity as a woman or as a minority, there is something in this album that will speak to you. The cult classic 2009 film, Jennifer’s Body, was inspired by a song of the same name from this album. While the album’s been criticized for its violence, it’s written by a band headed by a woman who’s dealt with addiction, the public eye, and her husband’s suicide. How could we expect anything else?

Make Room by the Destroy Boys (2018)
This was the second album for the California band, and led to Billie Joe Armstrong from Green Day becoming an outspoken fan. Songs like American River highlight struggles with being a teenager, feelings of apathy, and the desire to connect with people who also feel ‘other’. While their songs are relatable to most people who are searching for something that suburbia can’t provide, they’re especially relevant for women. The song Methatonin chronicles a relationship where trust is torn apart, presumably after infidelity–it’s songs like this that mishmash female strength with patriarchal insecurity, and this dichotomy is what makes the Destroy Boys so wonderful. Lyrics like, “I hope what you took away, you never get back” show the harsher, crueler side of femininity, and it’s this honesty that sets them apart from other bands in the area.

Get Awkward by be your own PET (2008)
With the album rising once again to social significance when the song Becky went viral on TikTok among the alternative scene, Get Awkward has stood the test of time. It mostly revolves around female adolescent friendships, and the jealousy and romance within them, but if you often feel angry, irrational, or feral, this is the collection for you. One of the highlights is definitely Black Hole: it’s an anthem for driving around and feeling mad in a world of order – think Fight Club’s soundtrack, if it featured the lives of women on the edge instead of men.

Elastica by Elastica (1995)
Elastica are one of the sexiest, coolest, and most detached female fronted bands of the 1990s, and it’s almost entirely due to guitarist and vocalist Justine Frischmann. They take the female perspective on male-dominated scenarios like sex, breakups and saying things honestly, but with the empathy of a matriarchy. Songs from this album like Stutter and Waking Up have gone down in the halls of fame in their own right, but as an album it’s not only one of the most cohesive of girl punk, but also the most timeless. Issues like performance and illusion are not specific to thirty years ago, and Elastica’s legacy stretches into 2020’s punk as much as did to their contemporaries.