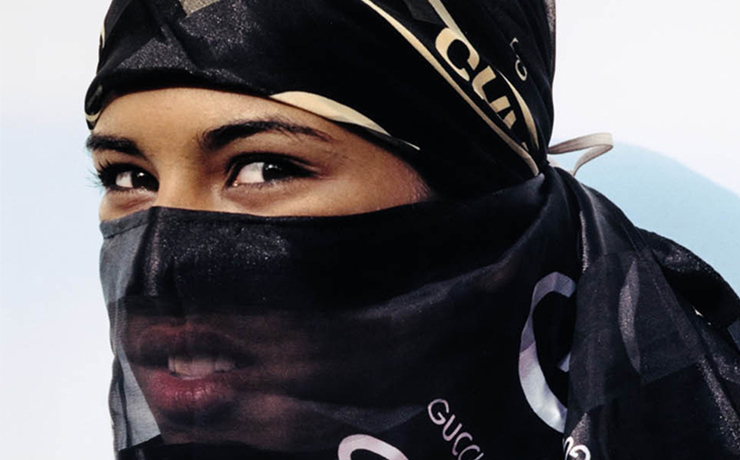 Maybe you’ve seen his graphic photos, adorned with layers upon layers of colors and patterns. Hassan Hajjaj, dubbed the ‘Warhol of Marrakesh’ is a Moroccan visual artist whose photographs have drawn widespread attention and fame in recent years. As a self-taught photographer, he creates bold imaginative sets and visually arresting backdrops consisting of colorful textiles to frame his subjects.

Hajjaj gained traction when he started capturing local Moroccan street culture with intent to juxtapose iconography of contemporary culture and consumerism with traditional Moroccan references. His photographs often include stereotypical representations of ‘oriental exoticism’, but are diffused with his camera; the meanings and interpretations of traditional cultural elements are changed through the overlay of recognizable Western brands like Louis Vuitton or Gucci, reclaiming the subject’s personal identity and unique narrative. While maintaining his distinguished visual language, Hajjaj’s photography practice has expanded to include editorial work, recently shooting notable celebrities like Billie Eilish and Cardi B.

I was shocked to get a call last year from @voguemagazine to shoot a @billieeilish cover…. felt like a dream till today. I am honoured and humbled. Choukran. Thanks to Vogue and Billie for the love and support. BIG THANKS to my dream team @ebonheath and @marteikorley1 for sharing the journey. I HOPE THIS OPENS MORE DOORS FOR ARTISTS AROUND THE WORLD!