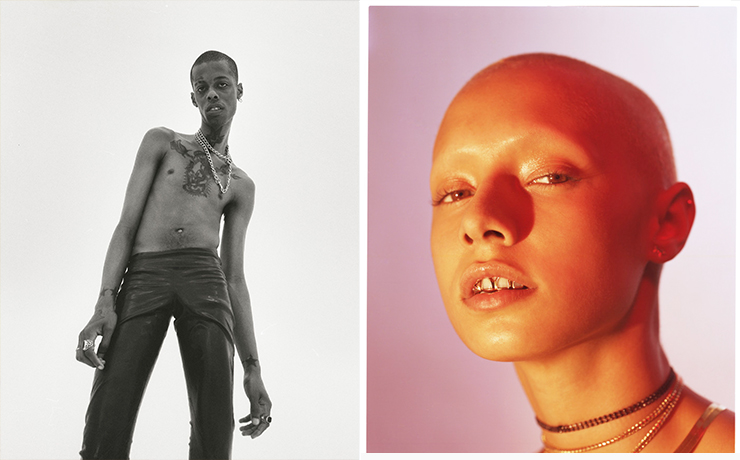 In conversation with Mona May, the mind behind Cher’s iconic yellow plaid suit

The work of New Jersey-born and London based multi-hyphenated creative Jordan Hemingway can only be characterised by its boundary-pushing exploration of beauty, the gothic and their intersections. As a photographer, director, DJ and all-around mastermind, audiences are forced to confront the darkest parts of themselves and to question what it actually all means. What does it mean to be beautiful, to be fashionable, to be goth? What meaning does a label hold?

Hemingway’s depiction of the human experience is heavily centred around subverting and uniting subcultures such as rave, queer, and fetish. His use of colour palettes and bodies create images that leave viewers unsettled with a pervading sense of the uncanny. This uncanniness resonates wildly with the theory of Jacques Lacan, whereby we find ourselves, “in the field of where we do not know how to distinguish good and bad, pleasure from displeasure.” The bodies are familiar, the parties we’ve been to, but somehow it all doesn’t feel quite real—or maybe it’s just too real, too familiar. This is what sets the work of Hemingway apart from the rest: his commitment to bringing these feelings out of the dark, where for so long society has tried to suppress them.

It comes as no surprise that he’s part of the 2020 Dazed100 list for his bold way of capturing people on film. With a portfolio that includes some pretty mainstream brands: Nike, Gucci and Saint Laurent, to the more avant-garde: 1017 Alyx 9SM, Commes des Garcons and Mowalola, Hemingway’s curiosity and vision are craved. He joined forces with fashion’s latest it-designer Mowalola Ogunlesi on her short film SILENT MADNESS, which was part of a wider exhibition debuted at Greenwich’s NOW Gallery last December. The film, directed by Hemingway, features musician Yves Tumor and depicts an out of the ordinary club night gone south, described in i-D as “an indulgently hedonistic exploration of our dark sides.”

Cloaked in vibrant red, green and dark-blue lighting, Hemingway’s lens follows Yves through a sonically muted, drug-fueled club trip. Hemingway also worked with Yves for the Gucci Pre-fall ‘19 campaign #GucciGig. The film and images again take a turn, demonstrating a dark exuberance and the hyper-visual. Yves exists somewhere in the centre of, and between a party and the end of the world.

This signature style of Hemingway’s was sparked by a skateboarding incident as a teen, leading him to pick up the camera and start shooting his friends. He fell in love with photography and has said that it’s the medium in which he feels he can express himself best.

His fixation with the gothic goes much further than just an aesthetic or the desire to be different. It’s about having the freedom to truly be yourself and have that reflect in whatever way feels natural to you on the outside, exempt from judgement. Self-ascribed as being “touched by the hand of Goth” he is one half of the DJ duo, @sissies_of_mercy alongside creative consultant for Alyx, Alban Adam. The two have played globally at PFW, Tokyo, Milan and Helsinki, and have also made a film titled ‘Anatomy of Goth’ breaking down the stereotypes and the intersections within goth culture. Although not purposefully a spokesperson for what it means to be goth, Hemingway’s work definitely provides much needed representation and a rounded perception of gothic culture as well as it’s many interpretations.