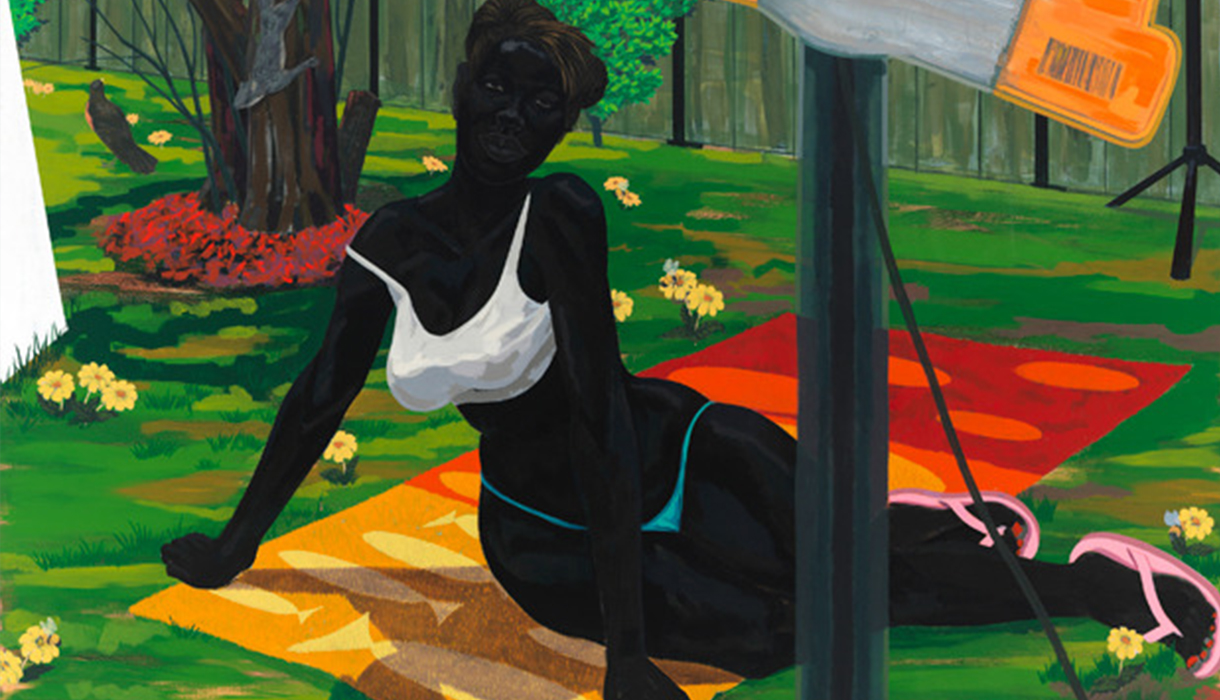 The protagonists of artist Kerry James Marshall’s paintings are purposefully undoubtedly black. Set in housing projects, barber shops, backyards and restaurants, his paintings tell stories of working-class African American life. A narrative that art history has failed to represent so many times before him.

When Marshall began his career as an artist portraying black figures, his choice of subject went straight against the art world status quo. Today that status quo has begun to change, with museums housing the good ol’ white, male masters decreasing in visitor numbers, and work by black artists such as Kerry James Marshall becoming increasingly sought after. And on top of Marshall’s art being very in line with the woke times we now (thankfully) live in, his large-scale paintings are absolutely awe-inspiring and aesthetically pleasing. So just like Beyoncé and Solange, NBGA are big Kerry James Marshall fans.

Although Marshall is one of the most sought-after contemporary artists, his goal wasn’t necessarily economic success. His goal was rather to push the envelope of non-negotiable, indispensable black presence in the art world. “The hope was always to make sure these works found their way into museums so they could exist alongside everything else that people go into museums to look at,” Marshall shares with NPR.

Poet Chloe Mitchell Talks Luxury Candle Line and How our Senses and Safety are connected.

The past decade has seen a major shift in art market heavyweights. Today Marshall’s paintings are auctioned off at around 2 to 5 million dollars, setting new records with every piece sold. Being named one of TIME magazine’s 100 Most Influential People of 2017, Marshall has been a crucial contributor to the art market shift that is now allowing a new generation of black artists such as Toyin Ojih Odutola, Njideka Akunyili Crosby, Kara Walker, Kehinde Wiley and Amy Sherald to enter art markets and institutions.

“When most people go to a big museum like the Louvre, it reaffirms their idea of what real art is supposed to look like. And if you keep going to the Louvre and Tate Britain and you don’t see black people in those pictures, then you don’t think black people belong in those kind of pictures, which belong in a place like that. People need to start thinking that these pictures belong in those places, too,” Marshall shares with the Guardian. And amen to that. Today Marshall’s work sits in the permanent collection of New York’s MoMA, alongside Jackson Pollock and Ellsworth Kelly, which might be a small step for a museum, but a big step for mankind.