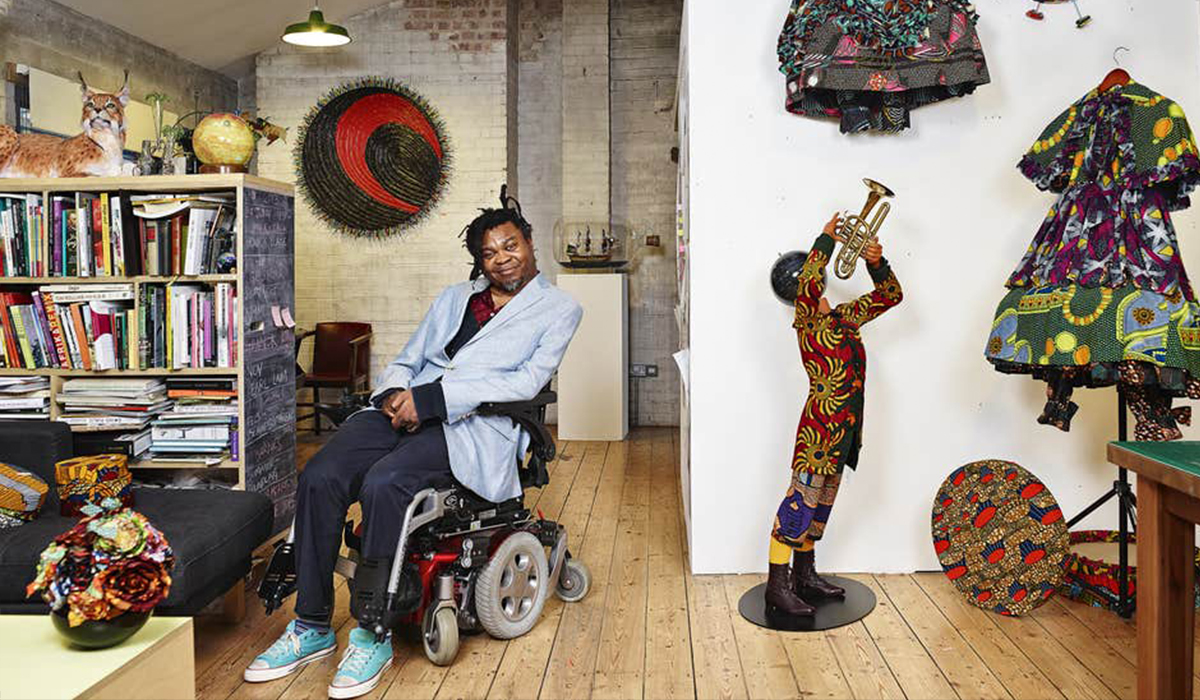 Ovary-Action? Nope ‘Period Poverty’ Is Real and Here’s Why

Yinka Shonibare MBE is a British-Nigerian contemporary artist, born on February 10, 1962, in London. He grew up in between continents and cultures, traveling between Lagos and London throughout his childhood. He eventually decided to settle in London to study fine arts at Byam Shaw College of Art in London and later his MFA from Goldsmiths. When Shonibare was 17 he was diagnosed with transverse myelitis, which caused his spinal cord to inflame and left part of his body paralyzed. This did not stop or hinder his creativity, instead, Shonibare used fellow artists to assist him in realizing his grand concepts and was appointed a Member of the Order of the British Empire.

Most notable for his dramatic sculptures that fuse European aesthetics with African textiles, Shonibare works with several mediums. Ranging from film, photography, paintings, and large-scale installations. He has expanded his discipline to include stunning outdoor public artworks, where he explores the movement of wind in fabric. With such a broad repertoire of skills, Shonibare is an artist difficult to categorize, in fact, his art is dedicated to challenging stereotypes and assumptions. Early on in his artistic career, he was asked why he didn’t create authentic African art. It was a curious comment, the kind of comment that sparked a moment for Shonibare. It made him question the notion of authenticity and prompted him to realize his artistic focus: “I realized what I’d really have to deal with was the construction of stereotypes, and that’s what my work would be about.”

His works are masterfully put together, somehow managing to combine complex themes of race, class, colonialism, and war. All of which are underlying. He explores them delicately so that viewers are invited to take an extra moment to think of the significance of the sculptures. His works also unpack ideas of identity, culture, and the post-colonial relationship between Europe and Africa. Considering his background, it is clear to see the connection between his personal story and the story he decides to present through his art. Shonibare often features himself in his work, one way or another, whether that be through a self-portrait in a painting or a more lowkey presentation through an exploration of national identity. These themes and ideas are always referred to as subtly, through a combination of references from Western culture and African elements. All of this is communicated through his famous and consistent use of Dutch wax-printed fabric.

Shonibare first began adopting the fabric to create elaborate, historically accurate Victorian-style costumes for his mannequins. It all started with the startling realization that the African fabric he was looking at in a shop in South London, were in fact made in the Netherlands. A little more research found that the wax prints had been exported from the Netherlands to Africa. Not only had they been manufactured in the Netherlands, but they were also inspired by Javanese batiks from Indonesia. They had been adapted and refined to suit a new audience, where the bright colored patterned fabric had become an instant hit with Africa. The fact that the informal symbol of ‘authentic African-ness’ and African identity was not really African, to begin with, was an irony Shonibare was excited to explore. It became his defacto material of choice, a signature element distinct in all his artworks.

Alike everything, his choice of material came with certain hidden meanings. The significance on the surface was related to a continental identity, but it also represented colonial commerce and politics. Its interesting that to explore African identity, Shonibare’s material of choice was a copy cat Indonesian textile from Europe, but it matches the aim of his art: “My work addresses the idea of having this fusion or hybrid cultural identity and what that produces…People always want to categorize things: I’m much more interested in this idea of a hybrid.”

The Victorian mannequins that he used to express this hybrid were equally ironic and aesthetic. The Victorian era marked the beginnings of British colonialism in Africa. By combining the quintessentially British style of dress with fabric that had essentially become the emblem of Africa, Shonibare was able to express multiple identities, stories, and influences. In fact, the headlessness of the mannequins was inspired by the French Revolution; a subtle homage to the guillotine. With such a mixture of inspirations, his artwork is a much-needed celebration of the hybrid, of diversity and the multicultural.